City Guide about Mostar with tips and reviews by travelers. 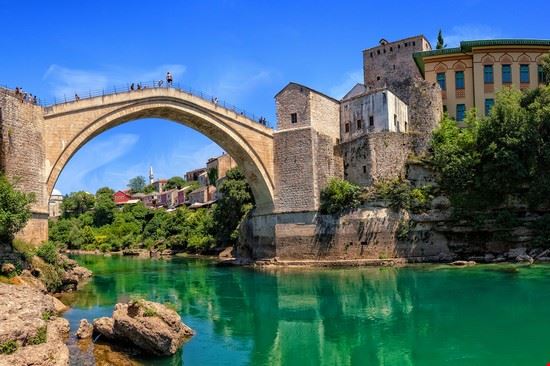 GuidePdfAppDownloadRow-GetPartialView = 0,0156245
Mostar is a city on the Neretva river in the south-west of Bosnia and Herzegovina with a population of around 106,000. (This figure is lower than formerly as a result of the population movements caused by the Bosnian War).
Mostar was established in the late 15th century  as the regional administrative centre of the Ottoman Empire. The city takes its name from the Stari Most (Old Bridge) and towers (mostari – ‘the bridge keepers’).
The Austro-Hungarian Empire conquered Mostar in 1878 and then it became part of Yugoslavia after World War I..
After World War II, Mostar specialised in aluminium, tobacco, wine products.
During the Bosnian War, on November 9, 1993 the city’s most famous monument , the Stari Most (1566), was destroyed.

Overall Guide : Old Bridge of Mostar and Old Town area, UNESCO's World Heritage Site. Mostar was named after the bridge keepers natively: mostari) who in the medieval times guarded the Stari Most (Old Bridge) over the Neretva river. Our Mostar Hostel Bojo... more is just about 500 metres from the Old Town, welcome.
Not to be missed Old Bridge , Old Town , Koski Mosque

Overall Guide : Bosnia and Herzegovina is very good country. She is sad but very nice. Sarajevo is capital city. Mostar is a city on the river whose name is Neretva. In Mostar lives 106,000.
Not to be missed old bridge , Velež , Vrapcici