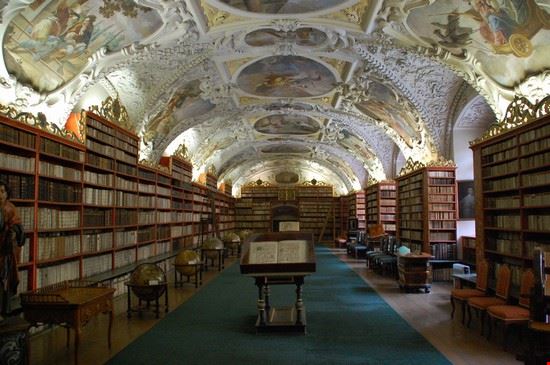 The idea for Strahovský klášter, or the Strahov Monastary in Prague, was conceived in the middle of the 13th century by two very important Czech Bishops, and Prince Vladislav II. Originally it was built out of wood for temporary use, and gradually replaced with permanent stone. The structure itself is somewhat notorious for having been destroyed and rebuilt several times throughout history. A couple of these setbacks include a very destructive fire of 1258 and the attack of the Hussites in 1420.

One particularly notable feature of the Strahov Monastery is its large and illustrious library named Theological Hall. With its gorgeous architecture, stunning décor, and rich history, people travel from all over the world to visit Theological Hall. Other areas that may pique your interest in Strahov Monastery include the Basilica of Our Lady, renowned for its stunning frescos, and the Cabinet of Curiosities, which hosts several interesting natural science collections (including some remains of the now-extinct dodo bird!).

Because the monastery has endured the test of time, it’s able to tell us a great deal about the social, political, and intellectual landscape of the Czech Republic for the past several centuries. A trip to Prague would not be complete without a visit to Strahov Monastery.

Do you know Prague? Tell us you opinion!

There are several different neighborhoods/parts of the city, each with a very distinct flavor. This city is the most picturesque more
ReviewLatestSmall-GetPartialView = 0