City Guide about Cairo with tips and reviews by travelers. 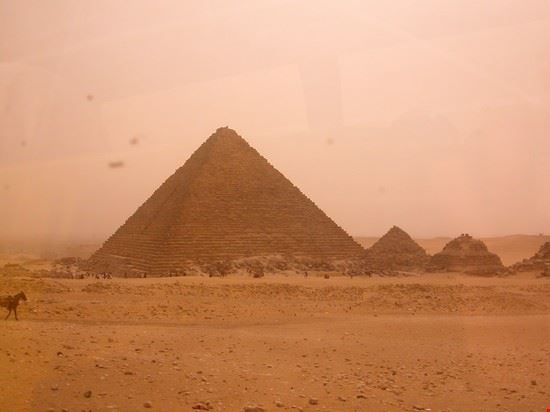 GuidePdfAppDownloadRow-GetPartialView = 0
Cairo, the Triumphant City, is Egypt’s wonderful capital. It is the largest city in both the Middle East and Africa and lies at the centre of all routes leading to, and from Asia, Africa and Europe.
The city extends on the banks of the River Nile to the south of its delta.
Cairo is the administrative capital and, close by, is almost every Egypt Pyramid, such as the Great Pyramids of Giza, the Ancient Egyptian City of Memphis and Capital of the Old Kingdom, on the very edge of the city.
Cairo provides great and well organized culture, including art galleries and music halls, such as the Cairo Opera House.
The city also provides some of the best accommodations and restaurants in the world, such as the Cairo Marriott and the Four Seasons.
Great part of the incredible and unbelievable charm of the capital of Egypt is the result of 2000 years mixture of Islamic, Christian Coptic and Jewish culture. An incredible and unique mixture that still keeps on flourishing to this day.

Overall Guide : There are actually over 100 pyramids in Egypt and most of them are grouped around and near the City of Cairo. Giza is, of course, the home of Egypt's best known pyramids, including the largest one... more in Egypt, that of Khufu. In addition to the major pyramids, there are also no less than six pyramids built for queens, together with even smaller cult pyramids. There are also many tombs, a number of temples, worker villages and the famous Great Sphinx. One of Cairo's many epitaphs is the "City of 1,000 Minarets". The city’s mosques date from the earliest periods of Islam up to the modern varieties. Here are some of them: Al-Maridani mosque, El-Aqmar Mosque (Gray Mosque), the Mosque of El-Hakim, Ibn Tulun Mosque, the Mosque of Sulayman Pasha al-Khadim, and more and more. The Egyptian Museum contains incredible and unique treasures as the The Tutankhamun Collection or the Royal Mummies. More than a million and half tourists visit the museum annually, in addition to half a million Egyptians.

Overall Guide : Egypt is my country and I live in it! It is a very beautiful helpful amazing country. It has everything you wish for and everything you want or need. I persuade everyone to come visit Egypt because nowadays Egypt is... more in real need and it has revolutions and everyone from all around the world is trying to help, don't worry it's safe and I hope you have fun when you are able to visit it anytime in the day .. What you can't miss is Citystars Mall - Pyramids and Thank you??
Not to be missed Khan Al-Khalili and Khan Misr Touloun , Fascinate Pyramids of Giza , The Coptic Museum

Overall Guide : It's a great city with great humble people u can find all your interests there from visiting touristic places to historical mosques and cafes to fabulous place to buy gifts and souvenirs to entertaining places, big malls stadiums to night... more clubs ... every one visit it will find what he wants except one thing... cleanliness of the streets is not great.

Overall Guide : Cairo is a beautiful city, it has got everhting in it and it has got clubs night clubs, modern schools the Nile the night is the most nice thing in all of it when any one is bored or tired... more you just go there sat and by the way its not local this is the Egyptian people life they live that way that's why most of the English, German or Russian people come to Egypt because its the most beautiful country, any one would like to go and visit. I live there and i love it.
Not to be missed Cairo International Airport , Pyramids Sound and Light Show , Do not drink alcohol during Ramadan

Overall Guide : live here for the past 2 years, Cairo have nice monuments if you are into history like i am,the city never sleep, Cairo is far from safe or stable,traffic is bad, pollution is bad, noise is bad, every time i... more speak with Egyptians they say its the most beautiful country in the world but when i told them i work for immigration they all want to know how to apply to get the f out of there.

Overall Guide : Egypt is really the best country in the world, although it's cheap, but it has a different taste, and the most important thing is your unique feeling of safety and secured, you'll be happy everywhere you go, the Egyptian people... more are very friendly, you must love Egypt once you visit it ...

Overall Guide : Cairo is the largest city in Africa and its treasures are kept in the Egyptian Museum (don't miss it). And there's Giza, where there are the majestic pyramids of Khufu, Khafre and Menkaure and the Sphinx (a real spectacle). I... more also recommend taking a cruise along the Nile, from Luxor to Aswan.

Overall Guide : I think cairo contain many amazing touristic monuments (coptic-islamic-pharoes), many hotels with lots of entertainment, the people of egypt are very kind, and they love tourists, they are so helpful also, it's currently very affordable but yet unsafe, you should... more visit the Tahrir square , check out the AMAZING graffiti of the youth .
Not to be missed Fascinate Pyramids of Giza , Alabaster Mosque (Mohammad Ali Mosque) , The Coptic Museum