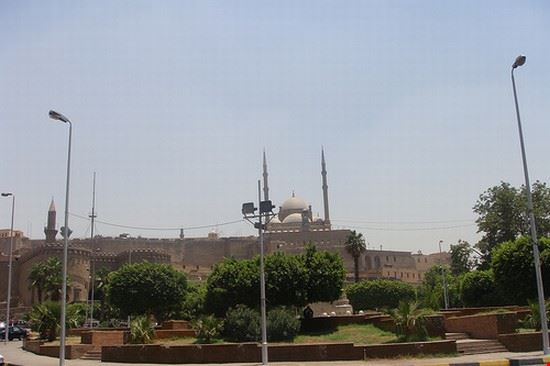 The Citadel is a fortification, a defensive wall, and was once popular for its fresh breeze and amazing views of the city.  It is also known as Saladin Citadel of Cairo.
When Saladdin established the Ayyubid Sultanate in 1171, and eliminated the Fatimids, he was still fighting the Crusaders in the Levant. It was therefore important to strengthen the defences of Egypt, which had suffered repeated attacks by the Crusaders. He commissioned the construction of a fortress to protect Egypt's capital, and the natural spot was a hill overlooking all of Cairo, where the Citadel still stands today.
The Citadel is a large fort which comprises of 2 mosques, the Police Museum and the Military. The Citadel is sometimes referred to as Mohamed Ali Citadel because it contains the Mosque of Muhammad Ali, built on the summit of the Citadel Museum.
This has is one of the  famous tourist attractions in Cairo, where you can get to see the vision of Muhammad Ali, especially the mosque bearing his name.  The mosque is the main focal point of the fort can be seen from most parts of Cairo City.
The Military Museum is also located within the Citadel, it is famous for its rich collection and historical buildings and was originally a palace during the reign of Mohamed Ali, the founder of the royal family that ruled Egypt from 1805 through 1952.

It is one of Cairo's most visited historic structures and is also considered one of the world's most impressive Mediaeval defence fortresses. In addition to a military complex, it had served as Egypt's rulers' residence from the 12th to the 19th centuries and is now home to several different museums with the most distinctive and recognisable being the Ottoman-style Mohammed Ali Mosque, with its multiple domes and two pencil-like minarets.

Explore the Citadel of Salah Ed-Din with impressive views over the bustling city of Cairo. Marvel at two of the most significant mosques in the Egyptian history, Mohamed Ali and Sultan Hassan. Visit one of the most unique museums the... more city has to offer and navigate the chaotic streets of the Khan el-Khalili bazaar for a few bargains.

steph
live here for the past 2 years, Cairo have nice monuments if you are into history like i am,the city more
ReviewLatestSmall-GetPartialView = 0