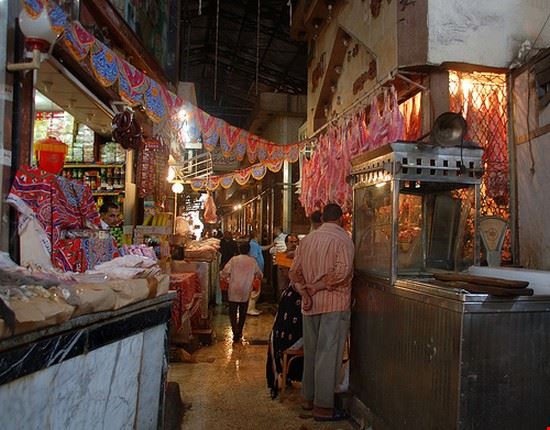 Islamic Cairo is the given to medieval Cairo, noted for its historically important mosques and other Islamic monuments. It is overlooked by the Cairo Citadel. Despite its name, Islamic Cairo is neither more  or less Islamic than the rest of the city, but it's the area of the city which holds the most, the greatest and the most famous Islamic monuments
This part of the city is fundamentally different from more modern Downtown district and is a unique experience for any traveler going to Cairo.
Unlike Islamic quarters in other  international cities, people, often quite poor, still live here.  A cemtyre of r of worship, trade, shopping and local commuting - it's a must-see for any visitors and deserves at least a couple of days exploring.
Attrcations include
The attractions include, Al-Hakim Mosque, one of the largest Fatimid mosques in Cairo. The Bayt al-Sihaymi, the best-preserved Ottoman merchant house. (This is off the beaen track and a place of  natural beauty – worth the visit). The Qalawun Complex. Built by Mamluk Sultan Al-Nasir in honor of his father Qalawun. The complex contains a mosque, an Islamic school and the mausoleum where Sultan Qalawun is buried. The school in particular is often described as the world's second most beautiful, second only to the Taj Mahal, of which there are similarirties.
The  Khan el-Khalili market lines the streets and alleyways up to al-Azhar Street.
The Al-Azhar Mosque is one of Cairo's oldest mosques and the world's oldest operating university.
Al-Azhar Park. The Al-Azhar Park is overlooking Darb al-Ahmar and the Citadel. Built on a rubbish dump, it's today a green lung of Cairo and a pleasant area to stroll around and enjoy views of the city.
Muqattam Hills is located on the outskirts of Cairo, just beyond the Citadel. The Church of Saint Simeon the Tanner is located at the foot of the hills. On a cliff wall is a depiction of prayers of Saint Simeon the Tanner and Pope Abraham. Muqattam Hills also provides a spectacular view of Cairo.
Islamic Cairo is not the best place for quality eating, although some restaurants can be found in the Khan al-Khalili area.
Islamic Cairo is definitely not the place for alcohol. Rather, settle down for some tea and shisha.
Khan el-Khalili is infamous for its pickpockets. Stay on your guard in crowds, but don't be afraid to venture into the smaller, darker alleys — they're quite safe, and you'll find the more interesting shops here.
Modest clothing is definitely a requirement. Women with bare legs and shoulders will be asked by many custodians of mosques to use smocks to cover these bare parts. Shoes should be removed before entering mosques.

steph
live here for the past 2 years, Cairo have nice monuments if you are into history like i am,the city more
ReviewLatestSmall-GetPartialView = 0