Fascinate Pyramids of Giza in Cairo 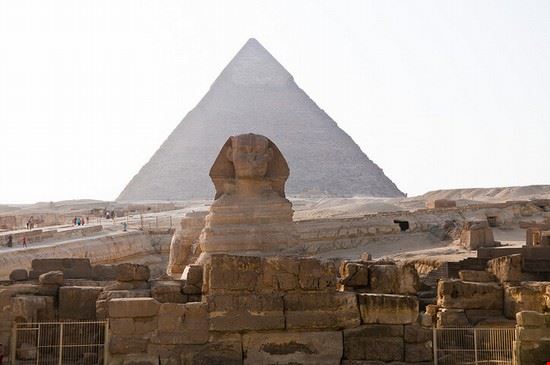 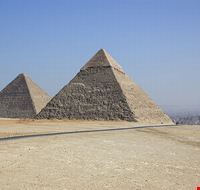 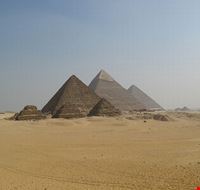 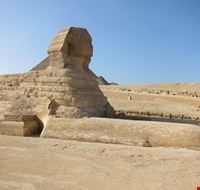 The Great Pyramid of Giza in Egypt is one of the Old Seven Wonders of the World.

The Great Pyramid of Giza was built by the Egyptian pharaoh Khufu around 2560 BC. It was constructed to serve as a tomb for the pharaoh after his death. The pyramid is an architectural landmark, and the technique used for its construction has been a topic of discussion among archaeologists and architects throughout the world.

One of the most sought after tourist spots in the world, this monument has many attractions. The famous Sphinx, a part of the monument, attracts tourists in numbers. Its museum houses the Sun Boat, which is very mysterious. There are several small structures that are worth visiting. Some of these are the Pyramid of Khafre, Pyramid of Menkaure, Queen’s Chamber, King’s Chamber, Unfinished Chamber, and Grand Gallery.

One of the most recognizable of the Seven wonders of the world!!The Giza Necropolis is an archaeological site on the Giza Plateau, on the outskirts of Cairo, Egypt. This complex of ancient monuments includes the three pyramid complexes known as... more the Great Pyramids, the massive sculpture known as the Great Sphinx, several cemeteries, a workers' village and an industrial complex. It is located some 9 km (5 mi) inland into the desert from the old town of Giza on the Nile, some 25 km (15 mi) southwest of Cairo city centre. The pyramids, which have always loomed large as emblems of ancient Egypt in the Western imagination,[1][2] were popularised in Hellenistic times, when the Great Pyramid was listed by Antipater of Sidon as one of the Seven Wonders of the World. Today it is the only one of the ancient Wonders still in existence.The Pyramids of Giza and others are thought to have been constructed to house the remains of the deceased Pharaohs who ruled over Ancient Egypt.[3]A portion of the Pharaoh's spirit called his ka was believed to remain with his corpse. Proper care of the remains was necessary in order for the "former Pharaoh to perform his new duties as king of the dead." It's theorized the pyramid not only served as a tomb for the Pharaoh but also as storage for the various items he would need in the afterlife. "Getting there:Metro Line 2 now runs from Cairo into Giza, although it doesn't go all the way to the Pyramids. Get off at Giza station. The pyramids are 8 km, 15-20 min trip Any number of minibuses and buses go to the site (known as 'al-haram' in Arabic'), they include the green public 900 and 997 buses. Taxi; There are essentially two options for this, unmetered & metered: Older black & white taxis - meters are not used, so don't forget to haggle. Solid-yellow and solid-white taxis - These are metered and air conditioned. You might save yourself the hassle with the black and white taxis, and at almost the same cost, if not less depending on your skill. By bus: From central Cairo, take bus routes 355 or 357. It departs every 20 minutes from the airport and Heliopolis, the bus at the Abdel Menem Riyad Station in Midan Tahrir, next to the Egyptian Museum, before continuing out to Giza and the Pyramids. Even cheaper and more authentic journey, take the regular buses 900 or 997, from the big central bus station under the overpasses, close to the museum. Be careful when about getting down, most people will be honest and help you, but you may encounter scammers who take you to their camels instead of to the pyramids. A visit to Cairo would be incomplete without a visit to the famous Pyramids of Giza and the  Egyptian Museum located in the center of the town. A visit to the Sphinx is also a must, since it is the landmark of Egypt’s captivating history. The Egyptian Antiquities Museum has more than 120,000 ancient Egyptian artifacts on display including the famous Tutankhamun collection and the royal Mummy room which features eleven Pharaonic dignitaries. Just strolling around downtown and in the older residential parts of the city where craftsmen work on the sidewalks is also a real pleasure. Cairo offers several wining and dining options. Make sure to try Koshray, the traditional Egyptian dish that consists of a delicious combination of spaghetti, macaroni, rice, chick peas, black lentils, garlic and spicy tomato chili sauce garnished with fried onions.