×
Notice
This website or its third-party tools use cookies, which are necessary to its functioning and required to achieve the purposes illustrated in the cookie policy.
If you want to know more or withdraw your consent to all or some of the cookies, please refer to the cookie policy.
By closing this banner, scrolling this page, clicking a link or continuing to browse otherwise, you agree to the use of cookies.
To accept | Read more
Munich
The whole website**

The Hofgarten in Munich

Munich Parks and Garden: Information about The Hofgarten 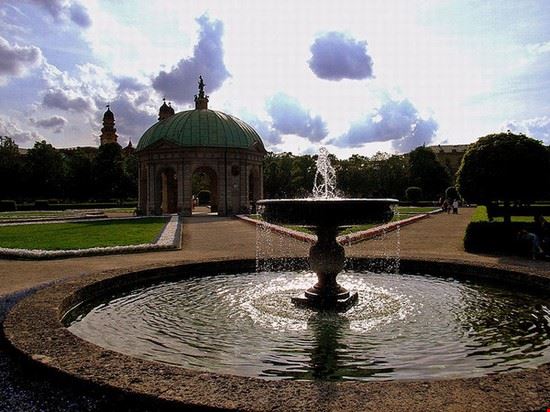 The Hofgarten of Munich, Germany was built in 1613-1617 by Maximilian I, Elector of Bavaria explicity as an Italian garden in the Renaissance style.  Set in the dead center of the garden is a pavilion for the goddess Diana (1615), on the roof is a replica of a sculpture of Bavaria, the original of which is in the Kaisersaal of the Residenz. In the north east corner of the park a square black granite memorial stands to the White Rose group, whose members were executed for a non violent campaign against Hitler's regime.

One of the great highlights of this garden, beyond of course its very-welcome-and-much-appreciated function as a getaway from the rush and bustle of the modern city, is its many wall paintings which depict various events related to the history of Bavaria.  This is a beautiful garden which is well worth an afternoon of idle wander or alternatively is a great place to lean back and people-watch.

Parks and gardens near The Hofgarten

simona
It's a sunny city, despite being in Germany. The English gardens are not to be missed! I recommend going to more
ReviewLatestSmall-GetPartialView = 0,0030025