Munich in a Day in Munich

Munich Sighseeings: Munich in a Day 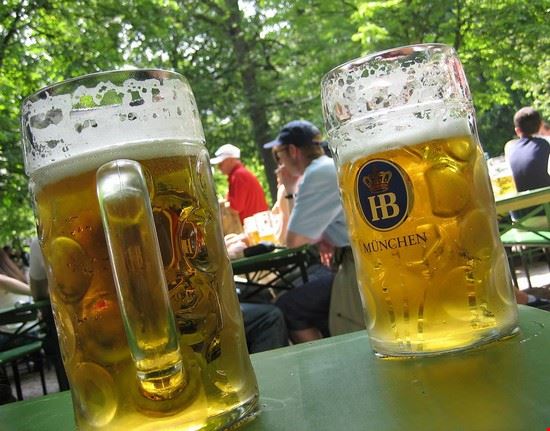 Munich is a sprawling metropolis filled with treasures, and has some of Europe's greatest museums and palaces. You can begin at the central square, Marienplatz, taking in the carillon (Glockenspiel) and walking nearby to an old church, an open-air market, and the most fashionable shopping boulevard in Munich.

After lunch, there will be time left for a visit to both the Alte Pinakothek and the Deutsches Museum, the two most important museums in Munich, followed by a late afternoon visit to the Englischer Garten, climaxed by a beer at the Hofbräuhaus am Platz!

The great museum in town is the Alte Pinakoteck. It really takes 4 hours to see this museum, one of Europe's greatest art galleries, in any depth, but you can do it in an hour and a half by concentrating only on its masterpieces. The collections were started by the ruling Wittelsbachs at the beginning of the 16th century, and they have grown over the centuries with frequent bequests. Albrecht Dürer is remarkably represented, as are the "Three Rs", Rembrandt, Rubens and Raphael, plus a host of other old European masters, including one of our favorites, Pieter Brueghel.

Then enjoy yourself in the Hofbräuhaus am Platzl; no beer garden in all the world is as well known as this sprawling, state-owned brewery, holding 4,500 beer drinkers. Oktoberfest is all-year-round here. How are you at downing a liter in a blue-glazed mug in 3 minutes? Münchners do it all the time. The air is overheated, and the smell of sausages, stale tobacco and beer permeates this massive building constructed at the end of the 19th century. The largest banquet hall you will likely ever see is on the second floor. In case you care, that monster Adolf Hitler used to hang out here. The pounding band and the singing and shouting drinkers contribute to the retro Bavarian atmosphere!

Reviews Munich in a Day

simona
It's a sunny city, despite being in Germany. The English gardens are not to be missed! I recommend going to more
ReviewLatestSmall-GetPartialView = 0