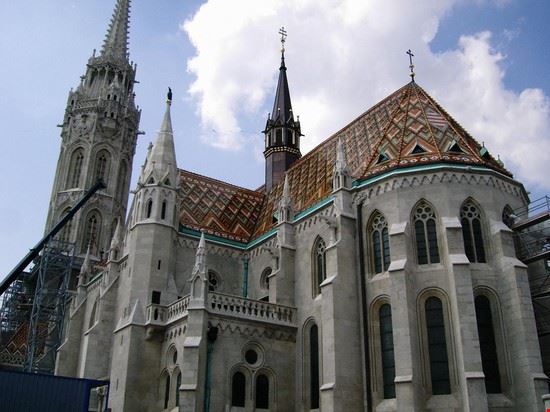 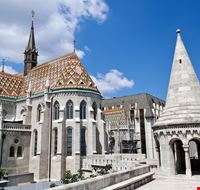 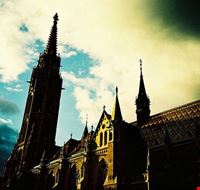 Located in the center of the Castle District in Budapest, Iglesia De Matías was constructed in the Gothic style of the latter 14th century, and then extensively renovated in the late 1800’s. In medieval times, it was the second largest church in town, and one of the most grandiose in the Hungarian Kingdom.

It was originally named after King Matthias, who ordered the reconstruction of one of its unique towers. It was also where the Matthias held his two weddings. This church was a popular place to kings to be crowned, one of which was King Charles IV in the early 20th century. Iglesia De Matías is also home to the Ecclesiastical Art Museum of Budapest, which starts in the medieval crypt and ends in St. Stephen’s Basilica. This historical art exhibit features several items including ancient vestiges, royal crown replicas, wood carvings, and royal jewels.

Another fun fact about Iglesia De Matías is that it has superb acoustics, making it a great place to hold organ concerts, and classical music performances. If you get a chance, it is highly recommended to check it out. Its rich history and eclectic architecture make the church a genuine gem of Budapest.

Matthias Church is located in Budapest, Hungry. It is a very popular tourist attraction of the city and is also referred to as the Church of Our Lady. The church was constructed in 1015 in a Romanesque style. For... more centuries it was used as a coronation church for the kings of Hungary. The present building of the church was built in the 2nd half of the fourteenth century in a florid late Gothic style. It was expansively restored in the late nineteenth century. The church is highly famed for its graceful and slender architecture that dominates the prime square of the beautiful Castle area.
AttractionDetailReviewList-GetPartialView = 0,0070068

Cristina Abbiati
I found Budapest to be a really good choice of European capital. In these difficult times, not having to always more
ReviewLatestSmall-GetPartialView = 0,0030026