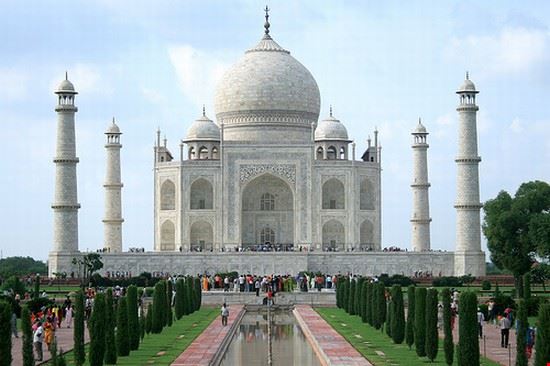 Taj Mahal, a beautiful symbol of eternal affection is situated in Agra, a city in banks of river Yamuna.  Taj Mahal is the most beautiful monument, built by the Mughal, the Muslim rulers of India.  It is built entirely on a white marble and is one of the most recognizable structures in the world.  The stunning architectural beauty of Taj Mahal is difficult to describe in words, particular at sunset and dawn. In full moon light, the Taj seems to glow up.  The monument was built by Mughal emperor Shah Jahan in memory of his beloved wife Mumtaz Mahal.

Taj Mahal is listed on world heritage site by UNESCO and has remarked itself as one of the Seven Wonders of the World. The Taj Mahal tour is popular at evening hours as it looks spectacular and milky white in dusk.

The Taj Mahal, a masterpiece of the Mughal architecture, is in Agra, India.Built by the Mughal emperor Shah Jahan for his beloved wife Mumtaz, the Taj Mahal is a symbol of love and dedication. It was designed by the great... more Persian architect Ustad Isa and is built in white marble. It was recently voted as one of the New Seven Wonders of the World and is also a World Heritage site. The Taj Mahal is most beautiful at night when the moonlight falls over it, with the River Yamuna flowing behind it. The monument is adorned by a variety of precious and semi-precious stones. It houses tombs, a mosque, fountains and gardens, making it a fine example of craftsmanship and art. The exteriors as well as the interiors are decorated intricately with verses from the holy Quran. Its grandeur is inexplicable, and it is thus a must-see attraction.Web Site: http://www.taj-mahal.co.in/index.htm
AttractionDetailReviewList-GetPartialView = 0,0156253

Do you know Agra? Tell us you opinion!