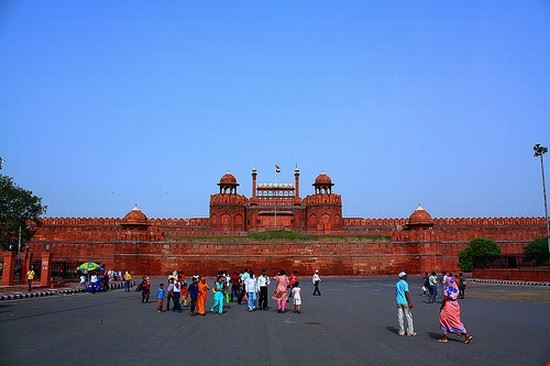 The magnificent 17th century Red Fort constructed by Mughal Emperor Shah Jahan is situated in the Capital of India, Delhi.  The fort was named Red Stone on the massive red sandstone walls surrounding it.  It is the largest monument of India and is listed as a world heritage site by UNESCO in the year 2007.

Its high level of art form and ornamental work has been attracting large number of tourists every year around the world.  The fort also serves as a site from which the Prime Minister of India addresses the nation on 15th August, the Independence Day of India.  Inside the fort is offered sound and light show depicting the Mughal history in evenings.  The Lahore Gate Entrance leads to retail mall with crafts and jewellery. One can also enjoy museum of blood paintings, archaeological museum and Indian war memorial museum.

The Red Fort (also known as Lal Qila) in Delhi is a UNESCO World Heritage Site. This fort is located on the eastern edge of Shahjahanabad. It is so called as there is a huge wall of sandstone on all... more the four sides. The length of this wall is 2.5 kilometers and the height towards the city is 33 meters and towards the river is 16 meters. There is a very high level of ornamental work and art form in this fort. The work of this fort is a blend of Indian, European and Persian art. The Shahjahani style which has resulted has a very rich color, expression and form. The fort exudes power and architectural brilliance. The significant buildings in the fort are Hayat Bakhsh Bagh, Moti Masjid, Diwan-i-Khas, Khas Mahal, Zenana, Nahr-i-Behisht, Diwan-i-Aam and Naqqar Khana. The Red Fort has thousands of visitors each year. The Prime Minister of India addresses his countrymen each year on 15th of August (Independence Day of India) from this fort.

The immense halls, museum, open green ground. The museum is great. We were lucky we went there on Dussera day and we saw the great Rawan Dahan ceremony. The red fort is truly red. and take a lot of photos.

Do you know Delhi? Tell us you opinion!