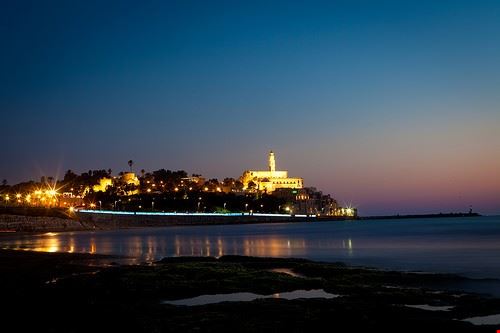 Old Jaffa, in Tel Aviv, is a charming neighbourhood known for its panoramic nature and evening colours.

Around 4,000 years ago, the port city of Jaffa served Egyptian and Phoenician sailors. According to Christian legend the city was named after Noah’s son Japhet, who build this city after the flood.

Razed and rebuilt dozens of times, with Napoleon being one of many invaders, Jaffa’s history has always been marked by turbulence.

Bargaining still takes place in Old Jaffa, and is a tourist attraction. At least three hours are recommended for walking around Jaffa, with recommended sights including the Clock Tower in the central square, the Jaffa Museum (first constructed during the Crusades and exhibiting artefacts from digs in the area), Kikar Kedumin (formerly Tel Aviv’s red light district, but now an arty place with restaurants and gift shops), and the port marina with its abundance of houseboats and restaurants.

Buses run from downtown Tel Aviv, and parking is free during the day.

Do you know Tel Aviv? Tell us you opinion!

Donatella Camporesi
The beautiful sea, culture, history, religion, and wonderful landscape. This is half of the incredible assets there that will satisfy more
ReviewLatestSmall-GetPartialView = 0