City Guide about Taormina with tips and reviews by travelers. 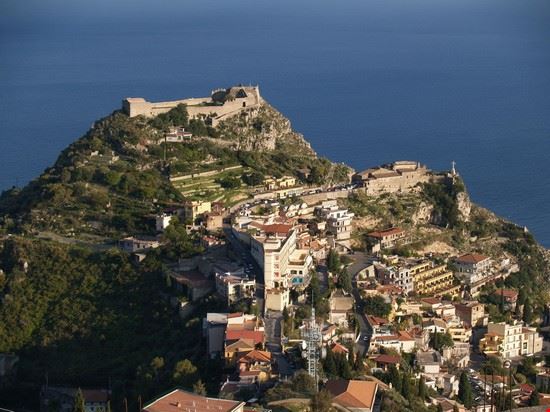 GuidePdfAppDownloadRow-GetPartialView = 0
Taormina, a town located at the foot of the mountain of Monte Tauro, is situated along the east coast of the island of Sicily, Italy. This town overlooks the Mediterranean Sea and lies close to the active volcano of Etna. It houses a total population of around 10,800 inhabitants.
The town experiences a Mediterranean climate with hot, dry summers and cool winters with light rain showers. The average temperatures are 35°C in summer and 10°C in winter.
The town of Taormina is an important historic location with Palazzo Corvaja in Taormina as the seat of the Sicilian Parliament. During the seventeenth century, the town developed as an important city.
Agriculture is still the predominant occupation in this town. The tourism industry is also developing owing to the popularity of this region and its surrounding areas.

Overall Guide : Teatro Greco, Taormina’s historic Greek theatre set against the backdrop of the sea, is very popular. Isola Bella, a nature reserve known for its several species of birds and lizards, and a small rocky beach that is famous with sunbathers... more is equally popular. Corso Umberto, a pedestrian thoroughfare, is thronged by people strolling, shopping or simply touring the adjacent areas. Also visit the garden, Giardino Trevelyan, which offers a panoramic view of the coastline.       During summer, there are several annual arts festivals held in town. The most famous one is the Taormina Arte held in Teatro Greco between June and August with several music, dance and dramatics shows. The David di Donatello Taormina International Film Festival witnesses the works of some of the big names in the international film fraternity. In July, WOMAD, which is the World of Music, Arts and Dance, organises three nights of music concerts in the Teatro Antico.

Overall Guide : Taormina is a true heaven on earth. City has so much to offer that the only thing you need is to invest time. Its clean beaches and blue water, ancient structures are so amazing that you won’t find such place... more anywhere else. Isola Bella which translates as a beautiful island is rich in natural beauty. Though the best time to visit is summer but visitors keep visiting throughout a year. You can hire a boat to explore nearby beauty. Taormina is favorite place for those who visit it once. Apart from beaches, “Duomo Santa Catarina” is a beautiful church and is a great place to spend time from summer. It’s not a huge one but is a perfect place for wedding. This church was built in 17th century and still has ancient touch over it as it is well preserved. Overall Taormina is a great place to enjoy and spend quality time with family.
IntroReviewListContainer-GetPartialView = 0,0156249
AdvValica-GetPartialView = 0
AdvValica-GetPartialView = 0