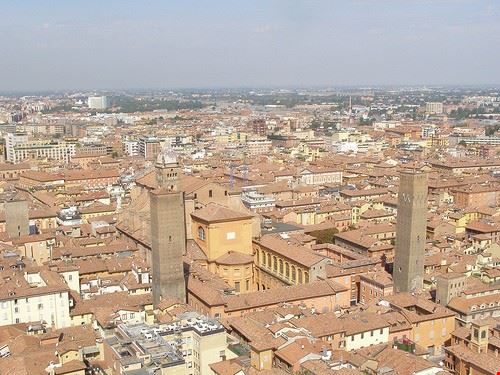 St. Pietro is the city cathedral and was made by Pope Gregorio XIII in 1582 seat of the Archbishop (Metropolitana). The building saw its origins in the early Christian era even if the first evidences date back to the 10th century; in the past centuries a baptistery was located in front of the façade.
Next to the church was a cylindrical bell tower similar to the ones in Ravenna, today hidden being contained in the powerful Romanesque church tower which was built during the 12th and 13th centuries.
The cathedral was rebuilt after a violent fire broke out in 1141 and then consecrated by Pope Lucio III. A rich marble side prothyrum (the lion door) and a rose window on the front façade were added in the 13th century and in 1396 a portico was also added, then reconstructed in the second half of the 15th century.
Between the end of the 16th and the beginning of the 17th century the church was radically restored by various architects and for this reason it lost every trace of the primitive Romanesque-Gothic structure.The foundation stone was laid on the 26th of March, 1605.
On the initiative of Pope Benedetto XIV from Bologna the church was enhanced with a new façade planned by Alfonso Torreggiani.Inside the cathedral some paintings and frescoes are noteworthy: the Annuciation by Lodovico Carracci in the lunette of the high altar (1619), the frescoes in the presbytery vault and in the apse (1579), a Crucifixion made with polychromatic cedarwood of the 12th century (already present in the Romanesque cathedral) and the group of terracotta statues representing the Mourning around the Dead Christ by Alfonso Lombardi (1522-26).

Do you know Bologna? Tell us you opinion!

Travelling Wizards
A brilliant ancient city center surrounded by walls and gates. Many palaces, castles, towers, cathedrals and churches. There are not more
ReviewLatestSmall-GetPartialView = 0