City Guide about Wadi Rum with tips and reviews by travelers. 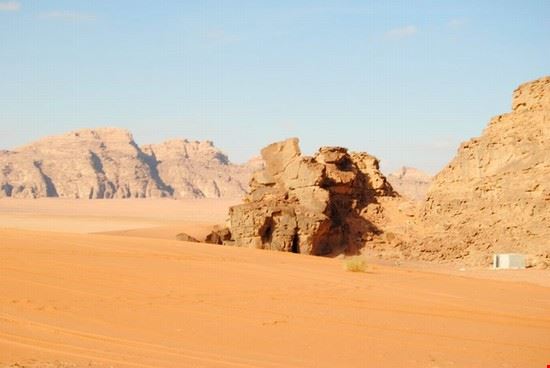 GuidePdfAppDownloadRow-GetPartialView = 0,0156253
A valley is called as a Wadi in Arabic. Rum means elevated or high in Aramaic. Thus, Wadi Rum, situated in southwest Jordan, is a valley that is cut into granite and sandstone rock. The village called Wadi Rum comprises of goat-hair tents, some shops, a school, concrete houses and the headquarters of Desert Patrol.

The Bedouins which live in Wadi Rum are part of the Howeitat Tribe which is further made up of two sub-tribes called was the Sweilhin and the Zilabia.
In Wadi Rum, almost the complete population belongs to the Zilabia family which is about one thousand. A dry desert type climate is present in this region.

The region of Wadi Rum is free from human interference except the rest house and visitor center that have been constructed to protect the region.