The Kutubiya Mosque in Marrakech 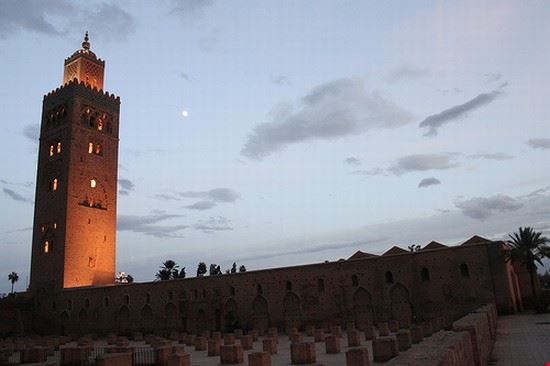 The Koutoubia Mosque is the largest mosque in Marrakech, Morocco and is named after the souk el koutoubiyyin, the book traders market which originated in the 12th century nearby. Situated near the Djemaa el Fna, the mosque is known especially for its magnificent minaret, which is the oldest of the three great Almohad minarets, remaining in the world..

The historic building was at first built in 1147, but unfortunately got demolished and re built soon after as it was not correctly aligned with Mecca. One can get to see some of the remains of the original mosque in the nearby Koutoubia Gardens. Non Muslims cannot visit the historic building interior, so the closest that one can get is to visit the gardens. However, one can get to see the minaret from all over the city, so a close view visit is not mandatory. In a day, five times prayer or ‘call to prayer’ rings out across the city from the top of this historic building, with speakers facing in every direction.

The Moroccan city of Marrakesh is famous for several tourists' spots.The Kutubiya Mosque reknowned for its collection of manuscripts, books and libraries. In the local language, Kutubiya means booksellers, which very much explain the inspiration behind its name. This area... more was developed by the ruler of this city, Yakoub Al Mansor. During his reign, book reading and printing was encouraged. This mosque is the result of his encouragement. Visitors can see more than one hundred book shops on the street of this mosque. Some of them are belong to ancient historical times. The mosque features 17 aisles, which are extended till the Qibla wall in the mosque. There are two mosques of Kutubiya. The earlier one is smaller than the later one. The second Kutubiya mosque became the status symbol of the Morocco city. This beautifully carved mosque is a must see attraction in Morocco.
AttractionDetailReviewList-GetPartialView = 0

Do you know Marrakech? Tell us you opinion!

Landmarks and Historic sites near The Kutubiya Mosque

This is a much overdue review! I visited along with 2 other female friends in March and we had the more
ReviewLatestSmall-GetPartialView = 0