City Guide about Rotterdam with tips and reviews by travelers. 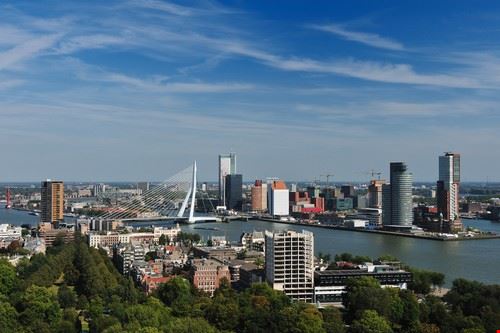 GuidePdfAppDownloadRow-GetPartialView = 0
Rotterdam is situated on the Maas River, and from its origins as a small fishing village, grew to become the largest port in the world, a position it held until 2004. It is still the largest port in Europe, serving numerous international import and export companies through a canal that was created between the Maas River and the North Sea in 1872.
During World War II, a German bombardment destroyed the centre of the city, leaving practically no traces of the old city intact. During its reconstruction, Rotterdam became home to many new forms of avant-guard architecture, including the cube houses for which it is most famous. A new business centre on the south side of the river was constructed in the 1990s. Over 55% of Rotterdam’s population is considered ‘low-income earning’, a situation that has led to the dilapidation of certain inner-city areas, although renewal projects are beginning to change this.
In recent years, development of Rotterdam and of nearby centres such as Amsterdam and The Hague has led to an almost total urbanisation of the region. This area is sometimes considered one single metropolis, known as Randstad.

Overall Guide : Rotterdam’s Delftse Spoort is the tallest building in the Netherlands. It stands an impressive 151 metres high. Another famous structure in Rotterdam is the Erasmus Bridge, a 2,600-foot cable bridge that spans the Maas River, connecting the... more city’s northern and southern halves. In addition to these two impressive sights, Rotterdam boasts some interesting and boundary-pushing architecture, such as the centre’s cube houses, with the result that this city is a fascinating example of modern and contemporary architecture. The birthplace of a particular type of techno music called Gabber, which combines fast beats and samples, Rotterdam has a lively and varied nightlife. In the area of Oude Haven, or Old Harbour, cafes and restaurants are set around a gorgeous little bay. At night, the city’s lights reflect off the water, making this a romantic and picturesque dinner spot. For a more alternative scene, head to the cafes and bars of Eendrachtsplein and Niewe Binnenweg, were musicians and designers mingle with art students. Here, you can also enjoy live jazz music in Jazz Café Dizzy. If you prefer a more pub-style scene, head to the bars around the Stadhuisplein. In short, Rotterdam has something for everyone.

Overall Guide : its found in Netherlands and it is the biggest port in the world