×
Notice
This website or its third-party tools use cookies, which are necessary to its functioning and required to achieve the purposes illustrated in the cookie policy.
If you want to know more or withdraw your consent to all or some of the cookies, please refer to the cookie policy.
By closing this banner, scrolling this page, clicking a link or continuing to browse otherwise, you agree to the use of cookies.
To accept | Read more
Amsterdam
The whole website** 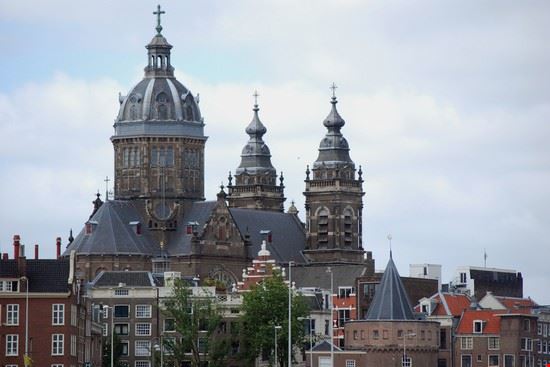 Positioned in the very heart of Amsterdam, the Church of St. Nicholas (Sint Nicolaaskerk) reflects the structural innovation of famous architect Adrianus Bleijs.  The church’s appearance and layout is a tasteful blend of the neo-Baroque and neo-Renaissance design styles.

Construction of the Church of St Nicholas was completed in 1887. The original name given to the building was “St. Nicholas inside the Walls.”  This was a reference to the church’s location within Amsterdam’s original borders.  It lies opposite to Central Station, and is distinguishable by a large rose window with two elaborate crowned towers on either side of it.  A sculpture by Bart van Hove of the Patron Saint of Amsterdam occupies a niche in the upper sector of this historic building. In 1999, costly renovations were done to both the interior and exterior of the church.

The Church of St. Nicholas is still very much in use today.  It holds a service every day during the week, and five others over the weekend. It is home to three separate choirs and a 19th-century Saur organ, which is used for both concerts and mass.  This historic landmark is worth a visit, as it offers a glimpse into Amsterdam’s foundation.

Do you know Amsterdam? Tell us you opinion!

it was amazing bro, you should come here, you have the time of your life and if you don't that's more
ReviewLatestSmall-GetPartialView = 0