City Guide about Bratislava with tips and reviews by travelers. 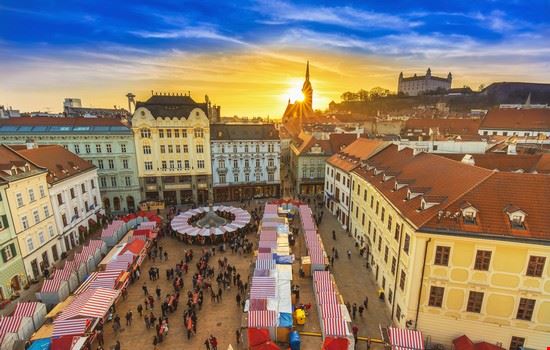 GuidePdfAppDownloadRow-GetPartialView = 0,0156244
Bratislava is the capital and the largest city of Slovakia. Set between the hills of the Small Carpathian Mountains and on the tip of the Danube River, this city is considered to be at the centre of Europe. It is hardly a few minutes drive from Austria and Hungary, and is the world’s only capital city to be bordering two nations. Vienna (the capital of Austria) and Bratislava are just 50 km apart. Bus and train services are easily available between the two capitals.
The city is typified by a mild climate. With average temperatures around 10°C, it receives about 5.4 hours of sunlight in a day.
With a population roughly estimated at 450,000, the city is the administrative and economical centre of the country. It is the seat of Slovakia’s government and houses several important museums, galleries and educational institutions.

Overall Guide : The historical city of Bratislava has no shortage of monuments and tourist attractions. Its churches are some of the most elegant in Europe and the world, including St. Martin’s Cathedral (a gothic building which crowned 11 kings in its existence),... more St. Clare’s Church (which exhibits medieval art and is richly decorated), Church of the Annunciation (which was built in the late twelfth century) and the Franciscan Church (which displays the saint’s body). Bratislava Castle is another unique attraction. Watching over the city since the ancient times, it has a wonderful view from the top, where you can see as far as Austria and Hungary. You can also shop on Obchodna Street or try the national meal, ‘Bryndzove Halusky’, or the popular Vinea grape drink, at the 1st Slovak Pub on the street corner. Veza on the Kamzik TV Tower is a rotating restaurant that offers a memorable dining experience.