City Guide about Ljubljana with tips and reviews by travelers. 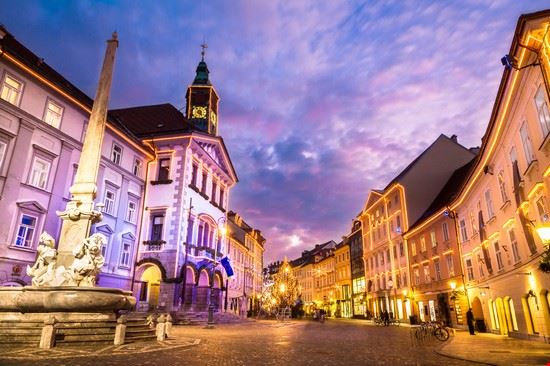 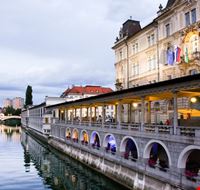 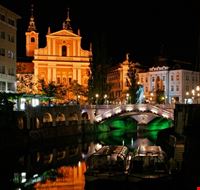 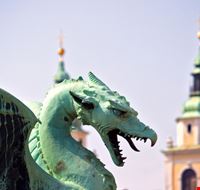 GuidePdfAppDownloadRow-GetPartialView = 0,003003
A city by the river on which the mythological Argonauts carried the Golden Fleece, a city by a moor where the crannog dwellers once lived, a city with the rich heritage of Roman Emona, a city that was once the capital of the Province of Carniola and the capital of Napoleon’s Illyrian Provinces, a city of Renaissance, Baroque, and especially Art Nouveau facades, a city that boasts the greatest exhibition of the architecture of the master Jože Plecnik—all this is Ljubljana.
Ljubljana lies in a basin between the Karst and the alpine regions at 298 metres above sea level. We like to say it is sufficiently large to contain everything that a capital should have, and small enough to preserve the individuality of its inhabitants. It is a city with a soul, featured by the Baroque Old Town which is nestled at the foot of Castle Hill, the Art Nouveau mansions as well as some of the masterpieces of the world renowned architect Jože Plecnik.
If one is to believe the legend, then the founder of Ljubljana was the Greek prince Jason, together with his companions, the Argonauts. According to the legend, Jason and the Argonauts, while fleeing from King Aites, from whom they had stolen the golden fleece, sailed from the Black Sea up the Danube, from the Danube into the Sava, and from the Sava into the Ljubljanica.
Around about here Jason encountered a terrible monster, which he fought and slew. This monster was the Ljubljana dragon, which now has its permanent abode on top of the castle tower on the Ljubljana coat of arms. At a national referendum held on December 23, 1990, the people of Slovenia voted for independence and sovereignity and on June 25, 1991, the Republic of Slovenia proclaimed its independence.
With this, Ljubljana became the capital of the new state, the heart of the political, economic, cultural and scientific life of the Slovene nation.
The significant mile stone for Ljubljana was Slovenia's accession to the European Union on 1 May 2004.
Ljubljana, with only some 276.000 inhabitants, combines the compactness of a small city with the facilities of a metropolis and, compared with other European capitals, remains a city on a human scale.

Overall Guide : The capital of Slovenia is a political, cultural, scientific, educational, business, and transportation centre that in its own way combines the characteristics of Slovenia’s eastern and western, northern and southern regions. The city nestling below the hill... more with Ljubljana Castle has a lively cultural life created by numerous theatres, museums, and galleries, one of the oldest Philharmonics in the world, cinemas, more than ten thousand cultural events each year, as many as ten international festivals, including the Ljubljana Summer Festival, the Ljubljana Graphics Biennial, the Ljubljana Jazz Festival, the LIFFE Film Festival, and the Druga godba Festival of Alternative Music, and much more. The central point of interest of Ljubljana is the Castle Hill. Excavations testify that the hill was first fortified in the time of the Celts and Illyrians and that the Romans had a military post there. The beginnings of the medieval castle go back to the 9th century, although the castle building is first mentioned only in 1144. At that time it was the seat of the provincial ruler Spanheim, who even minted his own coinage here. It gained its present image after the earthquake of 1511 and with further renovations at the beginning of the 17th century. It was occupied by the provincial rulers until the first decades of the 17th century, later becoming simply a garrison and provincial prison. The castle's renovation is now nearly completed, so that the two wedding suites, the tower, chapel and cafeteria are open to visitors, while the rest of the reconstructed premises are used for occasional performances, exhibitions and social functions. Near the castle stands a monument to the Slovene peasant uprising (by Stojan Batic, 1974). Ljubljana is an important congress city. Still today, it is proud of the Congress of the Holy Alliance, which brought the most prominent European statesmen of the time to Ljubljana at the beginning of the 19th century, and can offer first-class congress capabilities. In the centrally located Cankarjev dom Cultural and Congress Center as well as in the city hotels and nearby protocol buildings, world meetings, conferences, and congresses of the highest level are held every year. As Slovenia’s business and commerce center, Ljubljana hosts numerous trade fairs, and like any capital city it also offers numerous shopping temptations, from smaller shops and boutiques in old city core to large shopping centers on the outskirts. At every step, there are friendly cafes, pastry shops, and restaurants, as many serving distinctly Slovene cuisine as those with the offer of foreign horizons. During a visit to Ljubljana, which is linked to the world by road, railway, and Brnik Airport, visitors can chose among accommodations at a hotel, motel, or pension, in private apartments and rooms, at a campground, and at a youth hostel. Because of the University of Ljubljana, daily life in the city is marked by a challenging and lively youthful character but also by the charm of enjoying a tranquil and relaxing boat ride on the Ljubljanica River, a stroll in Tivoli Park close to the very center of the city, a visit to the Botanical Garden with more than 4,500 plant species, a walk in the Ljubljana Zoo, a guided tour of Plecnik’s Ljubljana, or the trails to nearby Ronik Hill, Šmarna gora, or many of the other friendly peaks in the city surroundings. Among the nearby places that invite visitors into the surroundings of the city are Iški Vintgar, a gorge with picturesque river pools; the climatic health resort on Rakitna, a plateau with a lake and an attractive walking circuit; Pekel Gorge and its waterfalls near Borovnica; the karst springs of the Ljubljanica River near Vrhnika, the former monastery in Bistra that now houses the Technical Museum of Slovenia, Zbiljsko jezero, lake with its diverse recreation offer, Sticna with its famous Cistercian monastery and Museum of Religion... Many places in the surroundings of Ljubljana are particularly inviting because of the unique nature found on the Ljubljansko Barje Moor.

Overall Guide : The very dangerous train that takes you to the castle, and the giant hamburger you get in the main square, while you get surprised by sudden rain ... but in fact there wires are mounted up high that spray water... more to keep the pigeons away from your sandwich ...

Overall Guide : I am going to visit there next months ending...

Overall Guide : I live here and I love Ljubljana!
Not to be missed ljubljana castle , lake bled , 3 bridges, dragon bridge

Overall Guide : it is okay

Overall Guide : I found Ljubljana a very nice country. There are many places to visit. For example for shopping & entertiment you stay in the capital Ljubljana where for rest & Relaxation you go to countryside; let say Bled. It's amazing place... more I will not forget it at all.
Not to be missed Citypark , Culture , lake bled
IntroReviewListContainer-GetPartialView = 0,016055