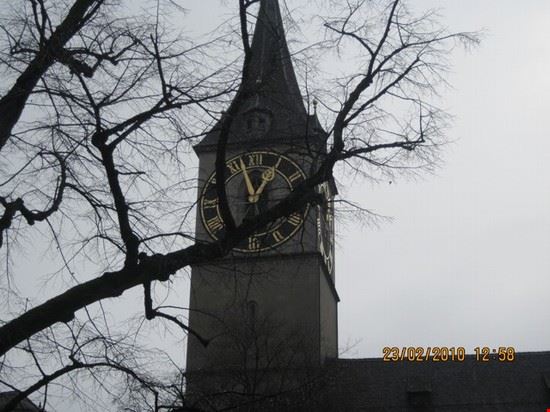 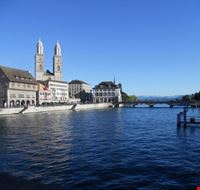 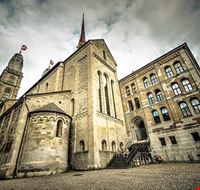 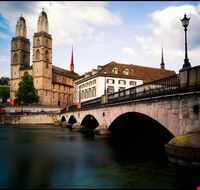 The Grossmünster ("great minster") is a Romanesque-style church in Zurich. Construction of the present structure commenced around 1100 and it was inaugurated around 1220. The twin towers of the Grossmünster are regarded as perhaps the most recognized landmark in Zurich.

In keeping with the Romanesque architectural style, Grossmünster offers a great carved portal featuring medieval columns with grotesques adorning the capitals. A Romanesque crypt dates to the 11th and 13th centuries, and is well worth the time to visit. The two towers were first erected between 1487 and 1492. Originally, they had high wooden steeples, which were destroyed by fire in 1781, following which the present neo-Gothic tops were added. Wagner is known to have mocked the church's appearance as that of two pepper dispensers.

It is one of the three major churches in the Swiss regional capital (the others being the Fraumünster and St. Peterskirche). Legend has it that the Grossmünster by Charlemagne after his horse fell to its knees over the tombs of Felix and Regula, Zürich's patron saints.

Do you know Zurich? Tell us you opinion!