Temple of the Emerald Buddha in Bangkok

Bangkok Monuments and Historic Buildings: Temple of the Emerald Buddha 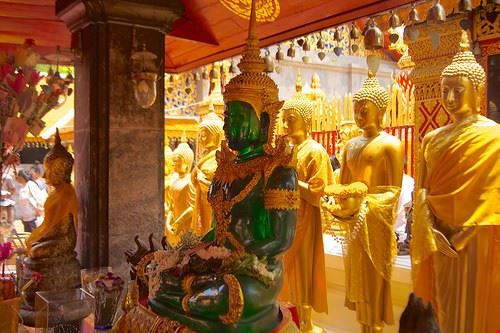 Wat Phra Kaeo is the most sacred temple of Thailand, which is situated on the grounds of the Grand Palace in Bangkok.

The Emerald Buddha is a holy figurine of sitting Buddha made up of green Jade, clothed in gold and stands about 45 cm tall.

The statue of Buddha, according to legend, was made in Patliputra, India and has traveled numerous locations under flagship of different kings until its final resting place in Wat Phra Kaeo.

The construction of the Temple started in 1785 by King Rama I and it contains holy buildings, pagodas and statues.

The Emerald Buddha is situated in Ubosoth. The outer walls of this temple are painted with a Thai version of Ramayana mythology, the Ramakian. It has three entrances, but only the King and Queen can use the central entrance.

The temple also houses a model of Angokar Wat, which has just recently been added in the list of the 7-Wonders of the World. To enter the premises of the temple, one has to wear long trousers, no matter what the season.

Reviews Temple of the Emerald Buddha

The Temple of the Emerald Buddha is in the Royal Palace in Bangkok, Thailand.The Temple of the Emerald Buddha was built in the eighteenth century by King Rama I. This temple is more of a personal chapel for the royal... more family; however, it is also open to the public.   The Bot is the most important, and the largest, building in the shrine. It houses a 66-cm high statue of Buddha, carved out in green jade. It is mainly the architectural grandeur of the temple that attracts tourists. Buddha’s costume is changed thrice a year and is an important ritual that can be performed by the King only. The interior walls of the shrine have Ayutthaya-style paintings, which depict the life of Buddha. Phra Mondop (library), the Royal Pantheon, a model of the Angkor Wat, and statues of elephants all over the complex are other important attractions of the temple.Web Site: http://www.sacred-destinations.com

Thailand is ancient and traditional though modern due to the developments in the Thailand Tourism industry and other parallel industries. It is an exotic tourist destination with a plethora of locales to be seen. The moment you land in Thailand,... more you are bound to love the country and the people due to their hospitality. This is why it is called as the “Land of Smiles”. Beaches, spas, islands, temples, shopping centers, rivers, waterfalls, wildlife, national parks, forests, etc. are some of the variety of tourist destinations in Thailand Tourism.
AttractionDetailReviewList-GetPartialView = 0,0070068

Landmarks and Historic sites near Temple of the Emerald Buddha