Information about Bridge over the River Kwai (Death Bridge) in Kanchanaburi 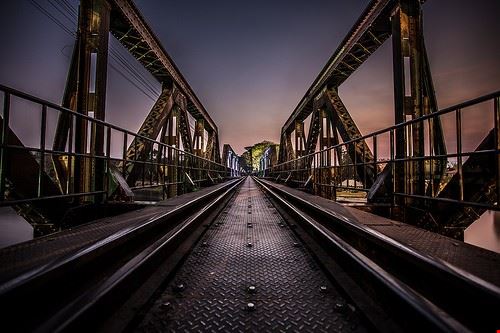 The bridge over the Kwai River is famously known as the ‘Death Bridge’. The construction of the bridge started during the World War II in September 1942, although the original plan was ready long before in 1939 by the Japanese.

The intention of building this was to provide a steady supply line capable of delivering around 3000 tons of supplies to the troops fighting in Burma.

The engineers estimated that it would take around 5 years to complete the 257 miles track as the terrain was harsh and the weather conditions were treacherous.

Moreover, the most strenuous section of the track was the one which ran through Thailand and it required high altitude bridges and cuttings through deep mountains.

To cut the time, however, over 61000 allied prisoners were made to work in inhumane conditions out of which 16000 died from diseases like beri beri, cholera, malaria, typhoid and others.

Another 200000 Asian labors, mostly Thai were forced to work and over 80000 met with death. Thus the bridges got the name ‘Death Bridge’ as a reminder of the atrocities.

Even with all these sacrifices, the railway operated just for twenty-one months and was soon crippled by the Allied troops and weapons. Only the eighty-mile stretch from Nong Pladuk to Tha Sao is still in operation daily.