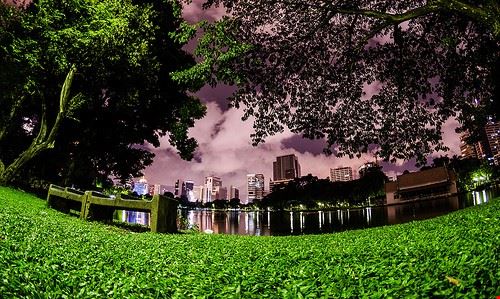 Lumphini Park is a major landmark of Bangkok, covering 140 acres of land. The park contains an artificial lake, wide open space and grasses. The track situated along the lake is popular for bicycling.

The park gets its name from ‘Lumbini’, which was the Birthplace of Buddha which stood on the outskirts of the city during its creation. It was built by King Rama VI in 1020s, which was then a royal property.

A statue stands at the southwestern entrance in his honor. It is one of the most visited parks of the country, especially on weekdays. On every Sunday, the park is open for runners to participate in the Silom Road Run.

It is also one of the rare areas in the city where mounted policeman still patrol the premises. It also contains the city’s 1st library and a dance hall. In Winters, an annual concert is held in the park in the Palm Gardens.

It features classical music by various bands including Bangkok Symphony Orchestra. Many grand pageants and Thai ceremonies are hosted in the park.

Parks and gardens near Lumphini Park