×
Notice
This website or its third-party tools use cookies, which are necessary to its functioning and required to achieve the purposes illustrated in the cookie policy.
If you want to know more or withdraw your consent to all or some of the cookies, please refer to the cookie policy.
By closing this banner, scrolling this page, clicking a link or continuing to browse otherwise, you agree to the use of cookies.
To accept | Read more
Kanchanaburi
The whole website** 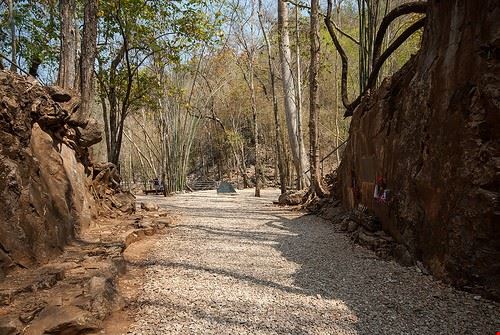 Sai Yok National Park is situated at Sai Yok district of Kanchanaburi. It is around ninety-eight kms from the main town. Spread over 500 sq kms of land, it was designated as a national park in October 1980.

The park is surrounded mostly by Limestone Mountains that run from north to south.

The hills and mountains of the park are covered with a mixture of deciduous and dry-evergreen forest as well as Bamboo forest.

The varied wildlife of the park includes red cow, bull, wild pig, tiger, samba deer and all kinds of birds. Some rare species like Khun Kitti Bat, which is amongst the world’s smallest bat and Queen Crab, can also be seen.

Other tourist attractions of the park include the Sai Yok Waterfall, Lawa Caves and the Kwae Noi River. The park also has modest accommodation facilities in the form of campsites and bungalows.

Some food shops and raft houses run privately can also be seen in and around the park.

Robert Bale
Kanchanaburi attracts several tourists because of the bridge over the Kwai Noi, which was made famous by a popular 1957 more
ReviewLatestSmall-GetPartialView = 0,003003