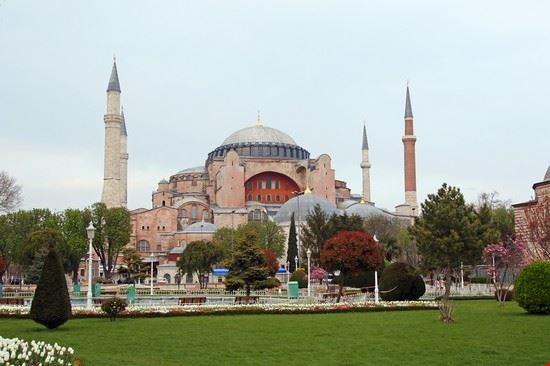 The Ayasofya Museum also known as Hagia Sophia which means ‘Holy Wisdom’ was previously a basilica which was converted to a mosque and now into a museum.

The museum is situated at Aya Sofya square in Istanbul and is open from Tuesday to Sunday from 9 to 5 daily. The museum is considered as the embodiment of Byzantine architecture and is popular for its massive central dome which is 56 meters high and 31 meters wide.

This circular dome which is set on a rectangular base is carried on four triangular sections of masonry. The interior of the museum is covered with polychrome marble with gold and colored mosaics.

Light enters through the crown formed by the forty windows and ribs covering the entire interior of the museum. There are 8 calligraphic discs inside which bear the names of Allah and Mohammed and others.

The apse, side aisles, semi-domes and main nave are covered with frescos and mosaics which depict imperial and religious motifs or other attractive designs. In the south gallery one can see some of the best mosaics in the church such as that of Deesis.

The Hagia Sophia is one of the most beautiful buildings of Istanbul, Turkey.   Built during the rule of Emperor Justinian in 532 AD, it is one of the greatest existing examples of Byzantine architecture. It is a symbol of... more the power and influence of the Byzantine Empire. Interestingly, today the place serves both Christians and Muslims. The most prominent architectural feature of the place is the massive dome which has been an apt model for designing other monuments. Mostly from the Islamic period, the interiors are decorated with golden mosaics, marble pillars and coverings.             The Galleries on the upper floor are an awe-inspiring sight with the best mosaics and give an excellent view of the naves used. When visiting Hagia Sophia, visitors can also tour the three mausoleums of the Sultan and the Church’s baptistery, all being in close proximity.

Hagia Sophia is a great architectural beauty and an important monument both for Byzantine and for Ottoman Empires. Once a church, later a mosque, and now a museum at the Turkish Republic, Hagia Sophia has always been the precious of... more its time. The mystical city Istanbul hosted many civilizations since centuries, of which Byzantium and Ottoman Empires were both the most famous ones. The city today carries the characteristics of these two different cultures and surely Hagia Sophia is a perfect synthesis where one can observe both Ottoman and Byzantium effects under one great dome.

Do you know Istanbul? Tell us you opinion!