City Guide about Mammoth Lakes with tips and reviews by travelers. 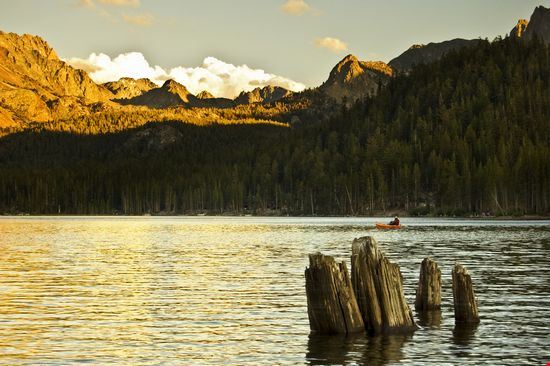 GuidePdfAppDownloadRow-GetPartialView = 0
The city of Mammoth Lakes is located in Mono County in California, USA. This city has a population of close to 8,000 residents and is spread over an area of 25 sq km. It was incorporated in 1984, and since, it has been a much sought after tourist destination.
The city’s economy has experienced an unseen growth owing to the setting up of the Mammoth Mountain Ski area, which has also caused an increase in real estate prices.
The topography of this city includes natural wonders like hot springs, lakes, valleys, mountains, rivers and so forth, attracting tourists in great numbers annually. Mammoth Lakes is also home to the Sierra Nevada Mountains, the Sherwin Range and numerous lakes. The city is surrounded by several national parks which is another reason why visitors come to this place.
The climate of this city remains pleasant on average. The mean temperature in summers is approximately 26°C, whereas the mean winter temperature is around 4°C.

Overall Guide : Mammoth Lake has some nice places to dine. The most popular restaurants are Mogul Restaurant, Thai’d Up, Nevado’s and Restaurant Skadi. The only micro brewery is over 8000 feet and its called Mammoth Brewing Company; it is a nice place... more to visit. Exhibits, events and beautiful artifacts are all a common feature of the museums here. Eastern California Museum, Laws Railroad Museum and Historical Site, Mammoth Ski Museum and Old Schoolhouse Museum are the most popularly visited museums here. Mammoth Lake is close to places like Lone Pine, Reno and Fresno. Lone Pine is around 100 miles towards the South, Reno is 168 miles towards the North and Fresno is 186 miles towards the Southwest. A nice time and place to enjoy some great Jazz music is the Mammoth Lake Jazz Jubilee.  This event has some great jazz music to enjoy.