City Guide about Palawan with tips and reviews by travelers. 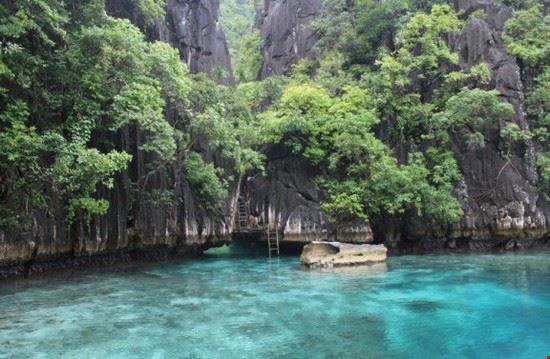 GuidePdfAppDownloadRow-GetPartialView = 0
Palawan is a province in Philippines and is a group of islands situated between the Sulu Sea in the southeast and the South China Sea in the northwest. There are almost 1,780 islands, islets, sugar-white sandy beaches and rocky coves.
The coastline extends to about 2,000 Kms. The population of the Province of Palawan in 2007 was 0.892 million. 87 different races and cultural groups reside in this province in peace and harmony.
The culture of this province has been strongly affected by China, India and the Middle East. 52 languages are spoken by the inhabitants and the prominent amongst these are Tagalog, Cuyonon, Palawano, Ilonggo and English. Roman Catholicism is prevalent in this region.
In the complete western coast, southern extremities and northern extremities, there is wet season for 6 months and dry season for 6 months. The eastern coast has a brief dry season for maximum 3 months and for the remaining part of the year, the wet season is not pronounced.

Overall Guide : Palawan Wildlife Rescue and Conservation Center The Palawan Wildlife Rescue and Conservation Center is situated on National Road, Barangay Irawan, Puerto Princesa City and one needs about 30 to 40 minutes to reach this place from the city. The intention of... more this center is to protect the endangered species of crocodiles. There is a hospital for disabled and sick crocodiles. The materials procured from crocodile skin are put into proper use. There is also a mini-zoo where some of the endemic animals of Palawan can be seen. Cuyo Fort Cuyo Fort is situated in Poblacion, Cuyo in Palawan. It is regarded as a unique and most ancient fort in the Philippines. In the interior of this fort, one can view the singular Perpetual Adoration chapel in Palawan, the convent and the church. The construction of this fort was over in 1680 and is a naval structure of the early Spanish era. Tabon Museum Tabon Museum is situated in Quezon and is separated from Puerto Princesa City by almost 155 Kms. The National Museum of the Philippines supervises this museum. Archaeological diggings and other artifacts are displayed here. Also, the ethnology of Palawan, the archaeology of Tabon Caves and a lecture of Palawan pre-history are presented here.

Overall Guide : Beautiful, pristine islands untouched by commercialism. Island hopping and snorkeling is a must. Cheap but delicious foods all over urbanized Puerto Princesa. Clean, well-governed and organized place. Friendly people. It's great that their government decided to limit commercial development and... more expansion within the confines of the city proper of Puerto Princesa and leave the islands alone and untouched. If you're thinking of making a "bucket list", this SHOULD be in your list.
Not to be missed Crocodile Farm , Underground River , Island hopping

Overall Guide : Palawan as a place and a people has a lot of potentials, if maximized and directed properly it could showcase a land of wealth, prosperity that could be shared by its people, leaders. In fact there is more than enough... more for this generation and those to come.

Overall Guide : Very much recommendable!!! If you really wish to visit the underwater cave, the world's new wonders, you should book at least 2 months before your scheduled arrival in Palawan. People there are very friendly.
Not to be missed Underground River , El Nido , Island hopping

Overall Guide : I love Palawan very much! Especially the foods, the people, and most of the places were so beautiful, I really can't describe it in words, thank you so much mom for bringing me there. :-))
Not to be missed Underground River , El Nido , secret beach

Overall Guide : Palawan was the Best places I ever lived at from the beautiful beaches, delicious seafood's, and clean and relaxing environment you can say how good life is. In addition of the people lived there how hospitable of them especially to... more the people visiting there magnificent place. For me Palawan was the best place to visit. I Love PALAWAN!
Not to be missed Underground River , Do It Yourself Coron Palawan Tours , Busuanga beaches and Resorts

Overall Guide : Nice place but very expensive. El Nido should regulate transportation fare - tricycle and the food is very expensive. A P 40.00 veges is not worth.
Not to be missed El Nido , Honda Bay , Underground River

Overall Guide : Palawan is beautiful.. if given a chance I want to go back in that place to see in second time around those beautiful natural resources it has...

Overall Guide : A place you want to visit every vacation. Water's so clear, beaches are so beautiful, and the people are so nice! Being there is like being in the paradise...
Not to be missed Underground River , secret beach , small &amp; big lagoons

3
Do It Yourself Coron Palawan Tours
4 Votes