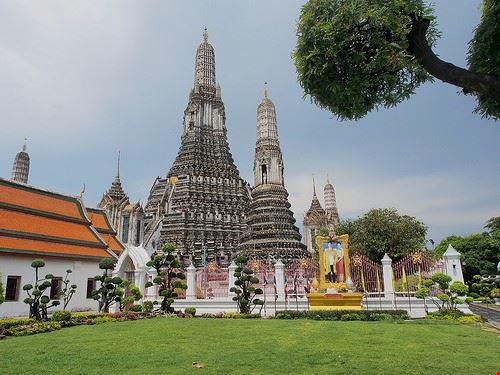 Wat Arun is a Buddhist temple in Bangkok, Thailand. It is located on the western banks of the river Chao Phraya, in the Yai district. It is also known as ‘Temple of the dawn’, as the first sun-rays in the morning get reflected from the surface of the temple.

The exclusive feature of this temple is its central prang which has steep steps that lead to 2 terraces. This prang symbolizes the Meru Mountain from the Indian cosmology.

The height of the tower is estimated to be about 86 meters. Four prangs surround the corners which are decorated with porcelain and sea-shells. Figures of historic Chinese animals and soldiers are carved at the base.

Hindu god Indra, riding on Erawat is depicted in 4 statues over the 2nd terrace. There are six pavilions of Chinese style made of green granite contain landing bridges.

The Ordination Hall is located next to the prangs and contain Niramitr Buddha images, which are though to be designed by Rama II. 2 demons guard the temple entrance.

Wat Arun is one of the great historical sights in Bangkok that is revered by the Thai people. It is a beautiful sight to be hold in the morning. A cautionary note... Scammers love to charge western tourists to enter,... more which in fact it should technically be free. To avoid the charges go around the temple side entrance early in the morning. You'll get in for free!