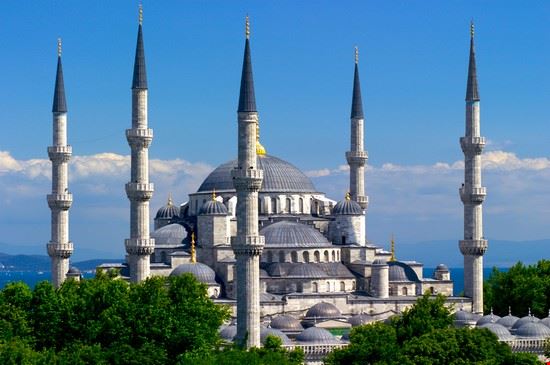 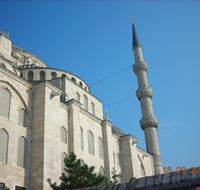 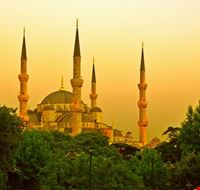 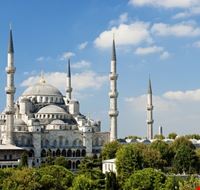 The Blue Mosque is the most famous landmark of the city of Istanbul in Turkey.

Also known as the Sultan Ahmed Mosque, it was built in the period between 1609 and 1616 under the rule of Sultan Ahmed I. It is the only mosque in Turkey which has six minarets and about 250 windows which stream the sunlight in a beautiful manner.

The interiors are a fascinating blend of conventional and novel ideas which make the mosque stand out as the landmark attraction of the city. There are various domes which culminate into a central dome, which in turn provides for perfect visual harmony.

The inside of the dome is decorated with thousands of ceramic tiles, stained glass windows and chandeliers. Various inscriptions and verses from the Quran can be seen adorning the walls. The most enthralling site is the ‘mihrab’, made up of finely sculptured marble.

Blue Mosque is the imperial Mosque of Sultan Ahmet I of Istanbul. It is known as the Blue Mosque for its interior tiles, which are on the upper level and is difficult to see unless one is right up there.... more This mosque was built in the year 1603 to 1617 and is an amazing masterwork of Ottoman architect, Sedefkar Mehmet Aga and is on the southeastern part of Hippodrome.

A very ancient but neatly kept building. I like it for the architecture.It makes me feel very happy to see the way the Turkey's people keep their heritage for the whole world to see.

Do you know Istanbul? Tell us you opinion!

Istanbul the gateway between continents
Landmarks and Historic sites
20 m

Istanbul is a place that you can keep going back to and making new discoveries each trip. Friendly and lots more
ReviewLatestSmall-GetPartialView = 0