City Guide about Hereford with tips and reviews by travelers. 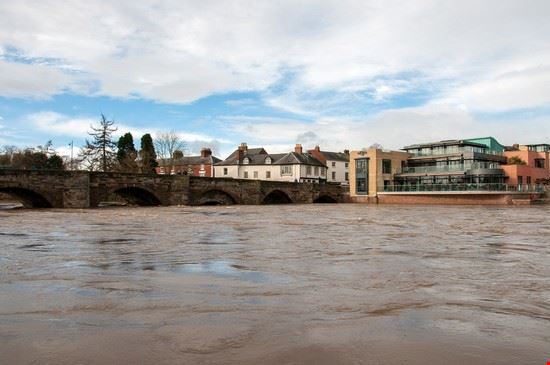 GuidePdfAppDownloadRow-GetPartialView = 0
Hereford is a historic cathedral city in Herefordshire County, England. The city has a quiet population of about 50,000 residents but offers several attractions for the travellers. One of the only five historic cities of Britain, Hereford is a delightful combination of rich heritage and modern conveniences.
The climate of the city is moderate in nature. The city experiences mild, warm summers and cool winters. The climate remains pleasant throughout the year which encourages tourism and agriculture. Rainfall is adequate and well distributed.
Founded in 700 AD, Hereford was a military base which developed as an agricultural centre. In recent times, the city’s economy has ventured into manufacturing, leather goods and chemicals.

Overall Guide : A beautiful construction located on the banks of the Wye River is the Hereford Cathedral. Some of the most important historical possessions, the Mappa Mundi and the Chained Library, are exhibited here. The Hereford Museum and Art Gallery is a brilliant... more example of the history and life of Herefordshire County. The museum hosts exhibitions of paintings, photography, prints and artwork. A popular and historic musical event in the city is the Three Choirs Festival, held annually in August. The festival features the musical choirs of the churches as well as international vocalists. The Courtyard Centre for the Arts is an arts complex which features shows and performances, and goes on a national tour as well. The building is made up of a combination of glass and wood which gives it a grand look. Theatre performances and lectures are held in the large halls.

Overall Guide : Great mix of old and new. Hereford Cathedral and the chained library are a must, even if your not religious. Hereford is a great base for exploring some amazing countryside, villages and towns. You can follow the black and white trail which... more is a series of beautiful villages with the traditional black and white houses. Shops in hereford range from little back street arts and craft shops to big high street names. Night life is very varied, from small country pubs to wine bars, clubs and great restaurants.
Not to be missed Chained library , symond yat , Cathedral

Overall Guide : A great place to visit and stay cant wait to go back again next year. Really enjoyed the cider offer with all of the artisan producers in the county, enjoyed taking a few samples.
Not to be missed Cider , Heritage , Landscapes