City Guide about Cairns with tips and reviews by travelers. 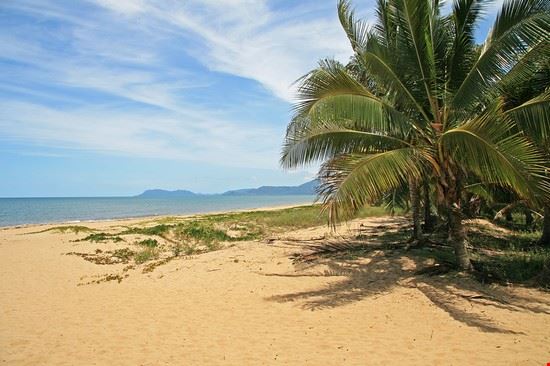 GuidePdfAppDownloadRow-GetPartialView = 0
With a population of 130,594, Cairns is the most famous city in Queensland, Australia. It is located at about 2,500 km from Sydney on the eastern coast of the Cape York Peninsula.
Cairns has a tropical climate with the maximum temperature rising to 31.4 °C and the minimum temperature falling to 17°C. Winters are mild and dry, while summers are warm and wet. Owing to its tropical climate, one can enjoy several outdoor activities as well.
Cairns was declared a town in the year 1876 and is named after the then Governor of Queensland, William Wellington Cairns. The most striking feature about Cairns is that it houses two of the world’s greatest natural attractions, the Great Barrier Reef and Wet Tropical Rain Forests, both being World’s Heritage Sites.
Mt .Bartle Frere, the highest mountain in Queensland, is also located in Cairns.

Overall Guide : Cairns is a metropolis in the state of Queensland in Australia. The city was named after the former Governor of this state. This city was formed to serve for exporting the goods like sugarcane, gold and other precious metals. Tourism... more industry serves a great part for the economy of this city. Cairns is the fourth largest tourist destination. Chinese leisure market is one of the great interests for the people. The city has plenty amount of shopping complexes. Cairns is a key worldwide destination for water sports and scuba diving as the Great Barrier Reef is very close to this area. Various other recreational activities like skydiving, snorkeling and many others are the main attractions for tourist. This city offers a lot of beaches and resorts. Museums, National parks are another gift for the tourist top visit. The food offered here are very authentic in nature. Sea foods are quite relished by the people here.
Not to be missed Daintree Rainforest , Palm Cove , Paronella Park

Overall Guide : Cairns is an ideal place for nature lovers with quiet parks, lakes, rivers and waterfalls located in the rain forest and a variety of flora and fauna with some rare species of animals. Apart from being home to the world’s longest... more cableway, Cairns also offers gondola rides to Kuranda, the central town of Cairns, which famous for its Barron Falls, Spanish castles, crater lakes and waterfalls. Due to the presence of the Great Barrier Reef, Cairns provides for a number of safe swimming locations and beaches for water sports. Adventure sports include sky diving, kite surfing, hot air ballooning and so on. With several bars, pubs, clubs discos, theatres and casinos that run all through the night, Cairns has a dynamic night life to offer to its visitors.
IntroReviewListContainer-GetPartialView = 0,0312498
AdvValica-GetPartialView = 0
AdvValica-GetPartialView = 0