City Guide about Edmonton with tips and reviews by travelers. 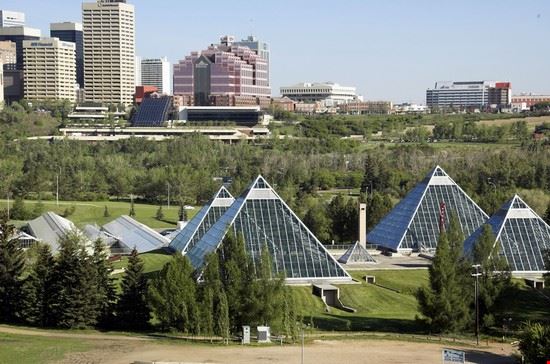 GuidePdfAppDownloadRow-GetPartialView = 0
Edmonton, the capital of Alberta, is the state’s second largest city. With a population of about 800,000, it is often referred to as ‘The City of Champions’. It houses the West Edmonton Hall, which is the largest shopping mall in the world.
The climate in Edmonton is typically pleasant and sunny. Summers are mild and it’s known to be one of Canada’s sunniest cities. The city’s four seasons are quite unpredictable. Snowfall starts in the month of November.
After being hit by a tornado in 1987, the city recovered and was on the path to prosperity by the late 1990s. The main focus of the economy in recent times has been oil and gas.
Edmonton was incorporated as a township in 2004.

Overall Guide : Edmonton is rich in cultural heritage. It is active in the arena of arts and drama. There are a considerable number of beautiful museums in the city. The Royal Alberta Museum is the largest of all museums in Edmonton. Edmonton also... more plays host to a series of annual festivals. The Works Art and Design Festival showcases works of renowned artists as well as emerging ones. The Edmonton Folk Music Festival is also very popular among tourists. The Ford Edmonton Park is an important tourist attraction with many historical structures for the visitors to enjoy. When in Edmonton, the World Water Park with some terrific water slides and wave pools is an exciting place not to be missed.

Overall Guide : Moved to Edmonton a month ago from US. We love it here, except for the mosquitos. The city is really nice, lots of trails and parks, and events that are family friendly. Housing is on the more expensive side -... more but then again we moved from mid-West where housing is very affordable. Love the grocery stores - especially Italian Centre Market. THeir deli is amazing. Looks like a good city to raise kids in.
Not to be missed West Edmonton Mall , Trails , Festivals

Overall Guide : I am from the Philippines, my two children are working in Edmonton City, Alberta, Canada and Edmonton City is a fast developing city and is a safe city

Overall Guide : I love Edmonton, Best City in Canada. I live in Edmonton for 9 or 10 months each year. I am retired and live close to the city centre, their are many good things close at hand as is my church,... more Lions Senior Centre. The roadway system is excellent and the street grid numbering system is now quite rare. NO trafic jams but remember to put on the snow tires.
Not to be missed Telus World of Science , West Edmonton Mall , Mayfield Dinner Theatre

Overall Guide : Nice family place. Safety a huge issue - especially with poor record of road safety and homicides. Becoming expensive by the day as more and more Canadians migrate East to West. With huge cuts in education announced by the goverment,... more it is unclear what our children have here for a future.
Not to be missed North Saskatchewan River valley parks , Muttart Conservatory , Downtown

Overall Guide : Summer Festivals!!! Every weekend of the summer there are fun things to do either downtown, or off whyte avenue or in Hawrelak Park. Unfortunately, winter is a bit of a snooze fest. More winter festivals seem to be in the... more works, however. Check out the city webpage for dates and prices etc. for admission to all of the fun events! Plus, the city is beautiful in the summertime! So much green everywhere.
Not to be missed Festivals , West Edmonton Mall , Edmonton Electronic Music Festival

Overall Guide : I haven't spent a lot of time there, however I am considering moving there for work
Not to be missed West Edmonton Mall , beach , World Waterpark

Overall Guide : Just moved to Edmonton and we are finding it is great. Lots of things to do and a pretty good transportation system.

Overall Guide : I think that Edmonton is kinda boring but at the same time you can make it fun but you have to have money.
Not to be missed shoppping , Royal Alberta Museum