City Guide about Luxor with tips and reviews by travelers. 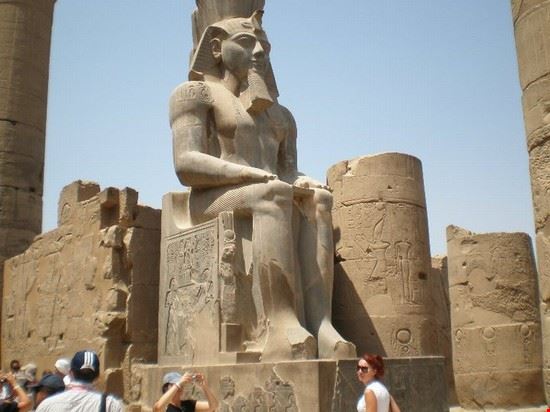 GuidePdfAppDownloadRow-GetPartialView = 0
Luxor, a city in southern Egypt, is the capital of the Al Uqsur governorate. With a population of 200,000 inhabitants, it is the site of Thebes, an ancient city. It is also referred to as the ‘world’s greatest open air museum’.
Luxor experiences an overall mild climate with the exception of its summers, which are scorching hot. Winters are dry and sunny with cold nights. October to February is the coolest period, while May to October is hot. April is the best time to visit.
The region of Luxor attracted tourists even in the ancient times during the Greek and Roman empires. Today, it is well known for its temples and the ‘Valley of the Kings’. Tourism has the largest share in Luxor’s economy followed by agriculture.

Overall Guide : The West Bank is the most famous site in Luxor. It consists of the Valley of the Kings, Valley of the Queens, Ramesseum, Colossus of Memnon, and the Temple of Hatshepsut which is a magnificent temple made in the honour... more of the first female pharaoh. The Temple of Luxor is another visual treat which was earlier connected to the Karnak Temple. Opposite the Luxor Temple is a Roman Chapel constructed in the honour of God Serapis. The huge complex of Karnak temples, which is over 1500 years old, is known for its Hypostyle Hall with gigantic pillars. Visitors can take a tour of the enthralling ancient ruins. The ‘Sound and Light Show’ must not be missed. Also, the Luxor Museum is worth a visit for its significant insight into the historical monuments in the surrounding areas.

Overall Guide : I traveled around Luxor and as a single traveller i felt very safe, also use local guides and taxi cabs. Vist as many sites as you can, but you must vist Luxor Museum it is fantastic. Fantastic place to visit... more and lots of sightseeing. There third of the world's raised Place warm in winter

Overall Guide : Fantastic place to visit and lots of sightseeing. There third of the world's raised. Place warm in winter
Not to be missed Valley of the Queens , vally of the kings , luxor temple

2
Valley of the Kings
1 vote

3
Valley of the Queens
1 vote