City Guide about Bhuj with tips and reviews by travelers. 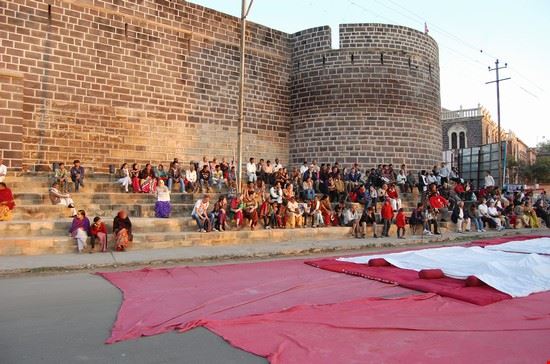 GuidePdfAppDownloadRow-GetPartialView = 0
Bhuj is a city in the state of Gujarat. The average height of this city is 110 meters above sea level. In the eastern side of the town, there is a hill called Bhujiyo. This separates Madhapar and Bhuj.

Apart from one big lake called Hamirsar, Bhuj also homes number of small lakes. There is a fort surrounding the old town with five major gates and one small gate called as ‘bari’ i.e. window. Due to couple of earthquakes in this region, the major part of the wall has fallen down. In the year 2000, the gross population of this place was 136,429. Bhuj is reputed for selling handicraft work.

The craftsmen in the nearby places come to Bhuj to sell their art. Those who desire to know about kutchi embroidery need to visit Women Artisans Marketing Agency, Kalaraksha, Kutch Mahila Vikas Sangathan and Shrujan.

Overall Guide : Bhuj is the one of the few old historical city (approx 450 yr old). where is artist of many type of art work on the cloth, like a Embrodary, Aabhla and printing like a Ajrakh, Batique, and dying also. One... more of the best Shree Swaminarayan Temple also in the Bhuj. Some of the old temple on the hill like a Sural Bhitt Mahadev and Bhujang Dev on Bhujiya hill, and many places to see...
Not to be missed Aina Mahal , Hamirsar lake , Tapkeswari mata Temple

Overall Guide : A historical place, I not just like city bhuj but I love this whole dist. KUTCHH. So many places to see and enjoy. Specially there all mandir, sea beaches, forts and palace, mountains. A to visit for groth industries in kutchh... more was memorable. In the culture we fill the original indianess. I MUST say To all "KUTCHH NAHI DEKHA TOH KUCH NAHI DEKHA"
Not to be missed MATA NA MADH , WHITE DESERT , ZARA MOUNTAIN

Overall Guide : Bhuj is a very nice place, plz come and visit Bhuj, it has own culture and good people here, Bhuj is a district level city.

Overall Guide : Lot to see in and arround Bhuj. See Rudra Mata Dam. Kalla Dunger, White Rann, many resorts on way to Kalla Dunger. Mandvi and the Resorts in Mandvi. Many Jain and Swaminarayan Temples. Mundra Port. One will need at least... more a week to tour these places.
Not to be missed Kalla Dunger , Mandvi , Mundra Port

Overall Guide : Bhuj is such a nice plase for yr holidays, u will enjoy your tour in the cuty as well as suraound area of kutch also, not only that but if u r not seen Bhuj i tell u u r... more mis some yr life's good time in other yr activities.

Overall Guide : Bhuj is an anciant city of Gujarat state in India. There are many good places to visit. One should visit bhuj if he come to india.
Not to be missed Ramkund , Five gates of old walled city , Palace of the king