×
Notice
This website or its third-party tools use cookies, which are necessary to its functioning and required to achieve the purposes illustrated in the cookie policy.
If you want to know more or withdraw your consent to all or some of the cookies, please refer to the cookie policy.
By closing this banner, scrolling this page, clicking a link or continuing to browse otherwise, you agree to the use of cookies.
To accept | Read more
Mysore
The whole website**

City Guide about Mysore with tips and reviews by travelers. 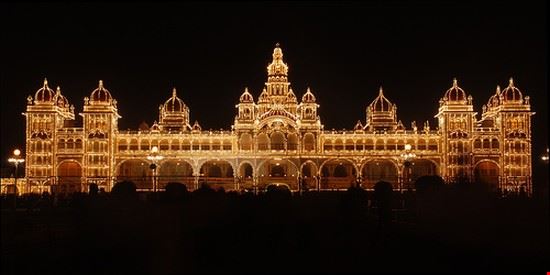 GuidePdfAppDownloadRow-GetPartialView = 0,0020017
Ranked as the second largest city in Karnataka, Mysore is one of the best places for tourist attraction for people from India and overseas.
According to the 2001 India census the population of Mysore was 799,228. The city is elevated at a height of 763 m above sea level.
Mysore is place of immense historic importance.
The city of Mysore is located at the foundation of the Chamundi hills.
Dasara, the festival of joy, celebrated in Mysore is one of the occasions which every tourist should make it a point to watch.
Mysore is also very famous for its well known silk Saree which is exported throughout the world.
One thing that a visitor cannot miss is the local sweet dessert called the “Mysore Pak”.
Mysore is also home to numerous palaces and hence it is called the City of Palaces.

Overall Guide : The Mysore Zoo is located on the exterior parts of the main city. The zoo is named as the “Chamarajendra Zoological gardens” but more popularly known as the “Mysore Zoo”. Most of the visitors make it a point not to... more miss. The Ambavilas Palace or more popularly known as the Mysore Palace is one of the major tourist attraction in Mysore . The palace was established in 1912. The architecture of the Mysore Palace is a total combination of the Gothic, Hindu, Rajput and Muslim fashion. The Mysore Palace is a well build structure with magnificent domes completely made out of pure marble. Vast gardens encircle the palace from all the sides. During the festival of Dasara and Diwali the palace is totally illuminated with thousands of lights. This is the best time for tourists to visit Mysore.    Also known as the “Doll’s Pavilion” the Gombe Thotti is a gallery for the collection of ancient doll’s which dates back to the 19th century.

Overall Guide : Mysore s a very good place to enjoy.. and i spent 3 years here.. its a great experience being here.. muhaaaa i luv u Mysore. wt to tell about this cute city... it gave me every thing happiness, love, a... more very good friends, enjoyment and every thing... i was very happy here apart from i was missing my family, relatives,mom dad,and school friends and manthri mall.... now i have to leave Mysore as i finished my ug course.... mysore s actually
Not to be missed Maharajah Palace (Amba Vilas) , Chamundeswari Temple , krs

Overall Guide : The Mysore city is a green full city due to chamundi hill, and mysore Dasar was world famous and a lot of historical place are there around Mysore and transportation is also very comfortable. Every one would like to see... more the place and chamundi temple was also very beautiful on top hill. An administrative is also good by the government.
Not to be missed Chamundeswari Temple , St Philomena church , Mysore Palace

Overall Guide : The Mysore district is famous by Mysore palace. and in the district so Many Tourism places are their. That Chamundi hill,Ranganatittu pakshi dhama, Ranganatha swamy temple,Museum, Tippu smaraka,Zoo, Etc And mysore is around by good Nature. and Mysore weather and... more climate is very beautiful. and K,R,S, Dam is famous of the Mysore. This dam is Support to 10,000,00 Formers above.

Overall Guide : Mysore is a beautyful city and historical place, also we are very happy to born hear so many thinks are there to say about Mysore

Overall Guide : Mysore known as Pensionars paradise, here climate is very beautiful for all season and adjust for all age group.
Not to be missed Balmuri back water , kukkarahalli tank , Sri Chamarajendra Zoological Gardens

Overall Guide : Mysore is a place to live peacefully.Easy to commute from one place to the other.Not very expensive to live. Very safe place, No underworld or such menace. Many good clubs, Many social organisations. Many highly Learned persons live in this... more place. A organised & heritage city.
Not to be missed Sri Chamarajendra Zoological Gardens , St Philomena church , Mysore Palace

Overall Guide : Mysore Is Peaceful City who there staying here there all are not lucky but very lucky ... Mysore is a tourism place, a peaceful place. Totally by my opinion Mysore is best for us.
Not to be missed exerbition , Sri Chamarajendra Zoological Gardens , Mysore Palace
IntroReviewListContainer-GetPartialView = 0,0190179