City Guide about Venice with tips and reviews by travelers. 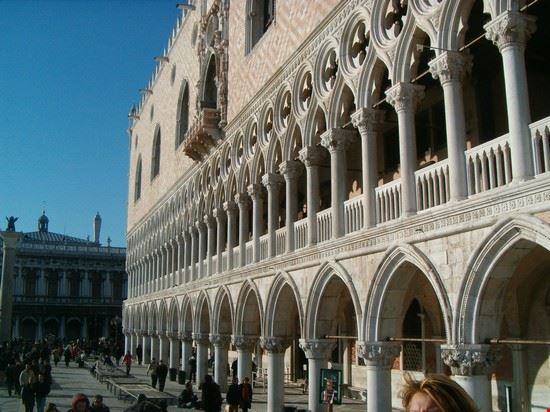 GuidePdfAppDownloadRow-GetPartialView = 0
Venice is a peculiar city defined by all those who have seen it as one of the most beautiful in the world. It consists of more than a hundred tiny islets, packed closely together around canals. The city is in a lagoon, protected by the longer island of Venice Lido.
Venice is on the north-west of Italy. Because of its popularity amongst tourists, the best season to visit the “City of Gondoliers” is probably winter, when hotel rates are more accessible and the city streets are a little less full. However, it does tend to get quite icy and misty in this season. There are also two major events in Venice such as the Venice Carnival in February and the “Biennale” (a world famous modern arts festival that takes place in summer every two years) which really should not be missed. August is definitely not the best time to go because it gets really hot and humid.
Venetians decided that the best way to safeguard them from foreign occupation was to conquer the malaria-ridden swamps to build a city from nothing. Indeed, for nearly 1400 years, the two or three miles of shallow water, which separated Venice from mainland Italy, not only protected Venice from invaders but also effectively isolated the Venetians from the turbulent Italian political life.
Venice became a republic of immense power, controlling trade routes in the Adriatic, and waging successful wars with rival states. Ruled by a doge, Venice was a proud and rich republic, known as la Serenissima (the most serene). Every year the Doge would take part in a symbolic ceremony, the Marriage of the Sea, to celebrate Venice's mastery over the ocean.
Like most great powers, however, Venice's glory was followed by a decline. Various battles were lost, notably against the Turks, and the city's trade routes declined in importance after the discovery of the New World.

By the eighteenth century, Venetians decided to take advantage of the beauty of their city and of their palaces by concentrating on the tourist trade.

Overall Guide : The picturesque city of Venice, Italy is full of romance and whimsy in every season, so it’s always a great time to plan your getaway! Looking for romantic trip ideas? Carnet suggests hiring a Water Taxi to take you to... more the Giudecca Canal just before sunset so you can enjoy the colors and reflection of the waters. Watch the rays of the sunset play on the gold of the domes of San Marco from the Bell Tower of San Giorgio Maggiore, far from the maddening crowd. Whether you’re traveling to Venice, Italy looking for romance or are a seasoned traveler, the Carnet travel guide to Venice has insider travel reviews for culture rich entertainment, art museums, galleries, fine dining, luxury hotels and fashion designer shopping addresses. A stroll through the neighborhoods of Venice is a lovely and charming experience. In the summer months, visitors and locals alike enjoy long evening walks along the Giudecca. In autumn, you can walk across piazza San Marco, but don’t forget to bring your rubber boots because of the high tide! In winter, ten centuries of history are covered by a silent blanket of snow. In the spring, make sure to experience the flowers and scents of the secret gardens in the city of the Doge. While in Venice, Carnet suggests taking a motorboat across the Venetian lagoon to the island of Torcello. Visit the ruins of the old Byzantine Cathedral and have a late lunch under the shady pergolas of the gardens of Locanda Cipriani. You might be seated at the table where Ernest Hemingway wrote “Across the River and into the Trees.”

Overall Guide : Venice has countless works of art, in galleries, museums and churches, and the lagoon itself is an experience in itself. If you have the time, the other islands around Venice can also offer interesting and a little less-crowded... more tourist sights. The major tourist attractions include: St Mark's Square. The most famous sight in Venice. A lively square surrounded by beautiful architecture such as the Byzantine basilica of San Marco. St Mark's Basilica. This is where the art and riches from the East, brought back by Venice's merchants, are kept. The coloured marbles and mosaics are fantastic. Palazzi and bridges. The best way to explore Venice is on foot or aboard waterbuses with a guidebook at hand to learn about the history of all the beautiful palaces and bridges that you will encounter. The most famous bridges are the Bridge of Signs and the Rialto, over the Grand Canal. The Accademia. The finest of many art collections in Venice. The Galleria dell'Accademia contains, amongst others, works by Bellini, Piero della Francesca, Veronese, Tintoretto, Titian and Canaletto.

Overall Guide : Venice can be very expensive, but if you look up some information before you go away, you can find a pass to reduce the cost of museums. You don't need transportation, except to go to the islands, because you can... more walk it easily and it's a pleasure to wonder the little narrow alleys ...

Overall Guide : It's not a good place to live, especially for the native inhabitants suffocated by tourism. There could be a lot more areas for sports, at least one more pool apart from the lido pool, the area which isn't known to... more tourists, the peripheral areas of the S. Alvise Castle and S. Pietro di Castello.

Overall Guide : Many don't know that Venice also has a Hard Rock Cafe! It's a bit small but for lovers of the chain but it's still nice to visit! It's behind Piazza San Marco. You get to it through several arches in... more front of the famous Florien bar. It might be tricky to find it then you get there, ask :)

Overall Guide : GORGEOUS. A CITY ON WATER. YOU CAN GET AROUND WITHOUT THE FAMOUS GONDOLA (WHICH COSTS 70.00 EURO). THE MAIN PROBLEM IS THAT YOU CAN'T EAT IN THE SQUARES OF THE CITY (EVEN IN SAN MARCO). THERE IS AN INFINITE NUMBER... more OF SHOPS AND STALLS. THE RIALTO BRIDGE AND THE BRIDGE OF SIGHS ARE THE BEST.

Overall Guide : Great place to visit to be away from modern cities and enjoy old architecture and walk
Not to be missed Orienteering in Venice , St. Mark's Square

Overall Guide : Wonderful, I have been there 4 times and would love to go back, it is so colourful.

7
The Bridge of Sighs
43 Votes