×
Notice
This website or its third-party tools use cookies, which are necessary to its functioning and required to achieve the purposes illustrated in the cookie policy.
If you want to know more or withdraw your consent to all or some of the cookies, please refer to the cookie policy.
By closing this banner, scrolling this page, clicking a link or continuing to browse otherwise, you agree to the use of cookies.
To accept | Read more
Cape Town
The whole website**

City Guide about Cape Town with tips and reviews by travelers. 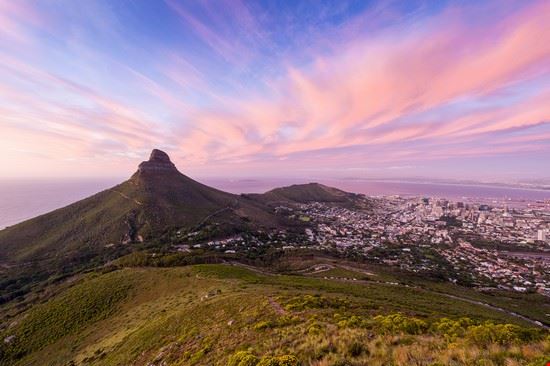 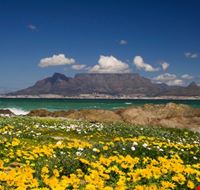 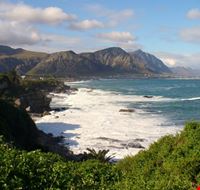 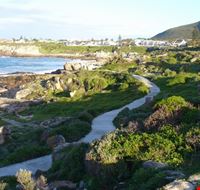 GuidePdfAppDownloadRow-GetPartialView = 0,0010009
Known as Kaapstad in Afrikaans, Cape Town is South Africa’s legislative capital, Pretoria being the executive capital and Bloemfontein the judicial capital, and oldest city.
The city lies at the foot of Table Mt. (c.3,570 ft/1,090 m) and on the shore of Table Bay.
An efficient port, Cape Town exports mainly gold, diamonds, and fruits and, with one of the world's largest dry-docks, ship repairing is an important industry.
Cape Town was founded in 1652 by Governor Jan van Riebeeck as a supply station on the Dutch East India Company's sea route to the East. The location was chosen for its sheltered bay which formed a natural harbour and protected ships from strong wind. When the Union of South Africa was formed in 1910, Cape Town became its legislative capital and Pretoria its administrative capital.
Nelson Mandela was imprisoned on an island very near the city, Robben Island, until his transfer to another prison.
Today, Cape Town is a picturesque city and a very popular tourist destination. It has a relaxed atmosphere and offers visitors a wide range of activities such as water sports, including diving, surfing and sailing, angling, wine-tasting, shopping, scenic drives, mountaineering, hiking, bird and whale-watching and much more.

Overall Guide : Top attractions include catching the cable-car up to The Table Mountain to enjoy a wonderful panorama of the city and peninsula, taking a ferry to historic Robben Island, visiting the old Castle of Good Hope, the Kirstenbosch National... more Botanical Gardens, the Dutch Reformed church, begun 1699, and the Old Town House,1755, which contains a museum of 17th-century Flemish and Dutch paintings. Magnificent beaches line the Atlantic seaboard - Clifton, Camps Bay and Llandudno to name just a few, and warmer waters can be found at Muizenberg, Fish Hoek, St James and Strand.

Overall Guide : Beautiful City with fabulous views of the Table Mountain. Wonderful Dining, beaches and shopping. Amazing coastal drive. Great Spas. Take a cable car to the top of the mountain and walk some of the paths with clear ocean views and City... more scapes. Vineyards have excellent dining and children's play areas.Even small cafes have delicious food and good coffee or tea. The icecream parlour at Camp's Bay is a must. One has to be aware of some areas especially after dark.

Overall Guide : I was in Cape Town about a month ago, infact it is a place i will never forget it in my life, i also had opportunity to visit some areas like the museum, the table mountain, the lion mountain, the... more seal island, and robin island talking about the water front view, and it shopping center around it, infrastructure, the weather condition. It is so marvellous.

Overall Guide : It's a safe city, but never move away from the centre. Beautiful weather, fun guaranteed and great shopping. I was there in September and the weather was excellent. Go and visit the wine makers. Take the cable car to the... more top of the city, where you'll see a breathtaking view. People are nice and very willing to give information.

Overall Guide : A lovely city to live in. We all need to work on the safety of our fellow citizens. The police forums and local government need to assist with this regard. Tourist attractions are off limits to the locals as transport... more to these sites are expensive. Some of the people living in Cape Town hav'nt been up Table Mountain.
Not to be missed Table Mountain , Garden Route Packages

Overall Guide : Cape Town: the city that you'll fall in love with. It has always kidnapped the heart of those who visit. You'll easily fall to your knees in front of the magnificent Table Mountain. Few cities can boast such a beautiful... more national park in the city centre, which allows you to enjoy many outdoor activities.

Overall Guide : The friendlest place and poeple, the cape big wheel, waterfront, cable ride to top of table mountain, the view from there. Cape Town is safe, has reasonable security cameras around a visit to the market on the parade is a... more must for bargains, a visit to the distric 6 museum in buitenkant street is a must.

Overall Guide : The most beautiful city - experience the beaches, mountains and many wine farms. Beautiful people - friendly and accommodating Delicious food - amazing restaurants with good service and many excellent restaurants. ..... and so much more to do and see.
Not to be missed Table Mountain

Overall Guide : There are many options for free. A lot of entertainment for children. What is more beautiful than the mountain and sea? Oceanarium is there. Playparks galore! Most beautiful parks to visit and to have picnics. Wine routes are beautiful and affordable. Weekend... more break aways are easy to do.
Not to be missed Table Mountain

Overall Guide : It's a beautiful city with very friendly people, they're certainly much more civil and smily than in Italy, provided you stay in the city, because in the suburbs there are the Bushvilles, the local shanty towns, where delinquency reigns. Definitely... more go on a safari at Kruger park.
IntroReviewListContainer-GetPartialView = 0