City Guide about Bern with tips and reviews by travelers. 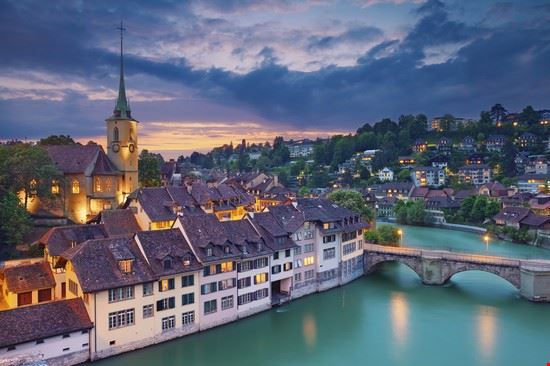 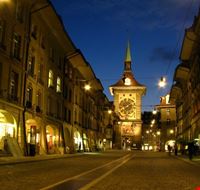 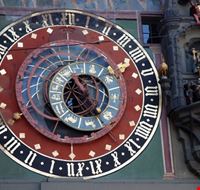 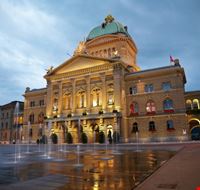 GuidePdfAppDownloadRow-GetPartialView = 0
Berne is a diverse and beautiful city situated in the Kanton of Bern and is also the capital of Switzerland.  It is situated on and around the River Aare. The medieval city center of Bern is inscribed as a cultural world heritage site by UNESCO.  It is the city where Albert Einstein worked for many years and the place that Emmental cheese calls home - taking its name from the Emmen Valley which leads from Luzern to Bern.
The most popular place worth seeing is the Zytglogge which means Time Bell, an elaborated medieval clock tower with moving puppets, the town hall of 15th century and the 15th century Gothic cathedral.
There are lots of historic sites, attractions and an active cultural life for visitors to get themselves involved with.   The tourists can enjoy the 11 magnificent fountains, sandstone buildings and historical towers as well.  Just a few steps from the River Aare and the main station lay a house of the parliament with a noble dome and Prison tower that are worth getting to know. If the sun shines during your visit you can even swim in the Aare at the 'Marzilibad' underneith the Swiss house of Parliment!

Overall Guide : UNESCO recognised the medieval centre of Bern as a World Heritage Site. The Clock Tower, built between 1191 and 1256, and the first western city gate which features an ornate astronomical calendar created in 1530 have much to... more do with this achievement. The Munster is an impressive example of Late Gothic architecture, towering above the old centre. It is recognised as the largest ecclesiastical building in Switzerland. The construction began in 1421, but the spire, which rises 100 meters into the air, was not completed until 1893. Bern has boasted a bear pit, the Barengraben, since the 16th century, and the current Bear Pits have been in the same location since 1857, although they have been renovated extensively from 1995 to 96 to create a more suitable environment for the bears. There are plans to turn the Bear Pits into a Bear Park, which would allow the bears to swim and fish in the river freely. The Botanical Gardens contain a wide selection of alpine plants, which provide visitors with an insider’s view of Swiss flora. The gardens extend over a 2 hectare area in the centre of the city, containing seven greenhouses in total. The Zoological Gardens , nestled between the river and the Dahlholzi Forest, house two hundred species of animals. The House of Parliament is home to the Swiss government and to the Parliament, and is open to public visitors. Parliament Square was reconstructed in 2004, and now, instead of just serving as a car park, hosts traditional markets as well as a monument of fountains representing the 26 cantons of Switzerland.