City Guide about Shrewsbury with tips and reviews by travelers. 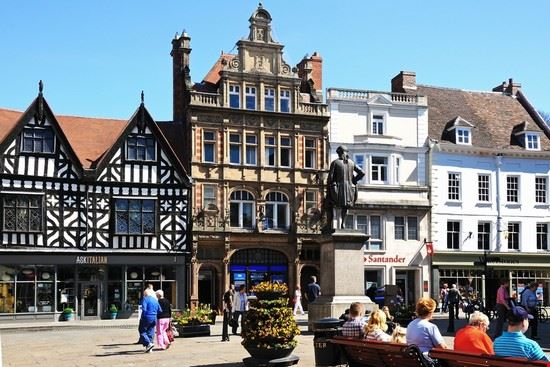 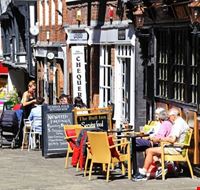 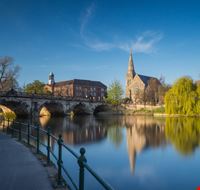 GuidePdfAppDownloadRow-GetPartialView = 0
Shrewsbury is the capital of Shropshire County, England. Located on the border of the Severn River, it is occupied by about 71,000 inhabitants. ‘Shrewsbury’ means ‘a fortified place’ in the native language. It houses many historic buildings from the sixteenth century and also serves as a retail centre.
The climate in Shrewsbury is pleasant throughout the year, with temperatures reaching extremes only in winters. Summers are sufficiently warm, with July being the warmest month. February is the coldest month of the year; winters are mostly wet and cool.
Founded in the fourteenth century, Shrewsbury was a major trade centre, especially in wool. Earlier, the economy of the town was dominated by agriculture, but now it has become service-oriented with transportation, tourism and retail being the dominant industries.

Overall Guide : Great place to live let alone visit, friendly people, useful shops not just selling junk like seasides, cafes you can sit outside to drink, interesting buildings from tudor times, you can sit in the park in town or visit the... more dingle to see some lovely flowers, plenty of walking areas and you can even take a boat trip on the river Severn.
Not to be missed the dingle in the park , the new music hall , in and around town its self

Overall Guide : TOO MANY SHOPS OUT OF THE TOWN CENTRE, TOO MANY BEGGARS, SOME NICE OLD REAL ALE PUBS AND GOOD EATING PLACES, NEED TO MAKE MORE USE OF THE RIVER, THE NEW THEARTE IS A JOKE, i THINK IT WAS NEVER... more DESIGNED LIKE THAT, WILL NOT RETURN, PITY SO MUCH COULD BE DONE WITH THIS TOWN
Not to be missed the dingle in the park , The Castle , Abbey Church