City Guide about Swansea with tips and reviews by travelers. 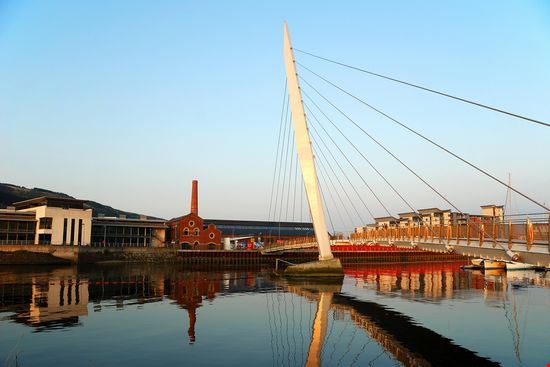 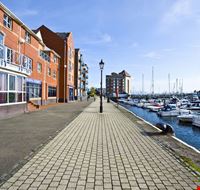 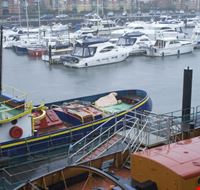 GuidePdfAppDownloadRow-GetPartialView = 0
Swansea is located on the south coast of Wales, at the mouth of River Tawe. The Normans built a castle here in the 12th century.
Swansea is situated on the beautiful Gower Penisular, UK's first designated ’area of outstanding natural beauty'. Although much of the city's architectural heritage was destroyed in wartime bombing, the wide sandy beaches, spectacular coastal scenery, lush parks, magnificent Maritime Quarter and medieval castles are still there making Swansea a major holiday destination.
The county’s whole coastal landscape is beautiful. The wide sandy beaches at Langland, Caswell and Limeslade are very popular with swimmers, whilst the wide, calm waters of Swansea Bay attract water-sport enthusiasts. Coastal paths connect most of the Gower bays and Swansea Bay itself, and hikers can enjoy breathtaking views throughout the year.
As a coastal region, Swansea has a milder climate than the mountains and valleys inland, but rain-bearing winds from the Atlantic also make it the wettest city in Britain.
In 1306, docks were built for shipbuilding. At the end of the 18th century, these docks were restructured to cope with the growth in the export of Welsh coal, copper and iron ore.
Swansea was only a short journey from Cornwall, where most of Britain's copper was mined.
In 1820 entrepreneur, Thomas Williams built a smelting works at Swansea. This stimulated the industry and South Wales started producing as much as 90% of Britain's copper.

Swansea is Wales' second city, and it grew to its present importance during the eighteenth and nineteenth centuries, becoming a centre of heavy industry. However, it was not subject to the same degree of immigration as Cardiff and the eastern valleys. Consequently, it still retains an agricultural and rural life.

Overall Guide : The former fishing village of Mumbles has excellent restaurants and coffee shops, and is a great place to buy local souvenirs and enjoy the most spectacular view of Swansea Bay. The village, also known as Oystermouth, is home... more to the ruins of a 12th Century castle. In addition to being a holiday resort, Swansea is also a commercial centre, with various hi-tech industries concentrated within the recently restructured dock areas. Within the city centre, you can visit the ruins of a castle, the Marina, the Glynn Vivian Art Gallery, Swansea Museum, the Dylan Thomas Centre, the Environmental Centre, and the Central Market, the largest covered market in Wales. Wi Swansea, Wales' City by the Sea and birthplace of Dylan Thomas and Catherine Zeta Jones, is a lively and vibrant maritime city and a regional shopping centre. Close by, Victorian resort of Mumbles offers a fantastic assortment of attractions, such as a pier, traditional boutiques, craft shops and ice-cream parlours. The Gower Peninsula extends West of Mumbles in a succession of stunning coastal and rural sceneries. To the East, the 'Waterfall Country' at Afan and the Vale of Neath is a haven for both walkers and bikers.

Overall Guide : If we could we would move there, the people are very friendly, helpfull and caring. We really enjoyed Swansea Mumbles area. We also went to Cardiff, Toyrefail and the Rhondda Valley. My Mum was born in the Rhondda. Everywhere we... more went we were treated as family. Way to go south Wales.
Not to be missed Swansea Marina , The covered Market , Dylan Thomas Centre

Overall Guide : Swansea is located in a area of outstanding natural beauty with magnificent cliff walks, unspoiled beaches and rural splendour. The people are warm and hospitable.
Not to be missed Oystermouth Castle , LC2 , Llangennith Beach

Overall Guide : Beautiful place and amazing entertainment, lovley sea beah, good whatch out for the wind because when its windy sand gose in your eyes everyone is caring and helpful
Not to be missed sun and beach , The Chocolate Factory , Oystermouth Castle
IntroReviewListContainer-GetPartialView = 0,0156263