City Guide about Atlanta with tips and reviews by travelers. 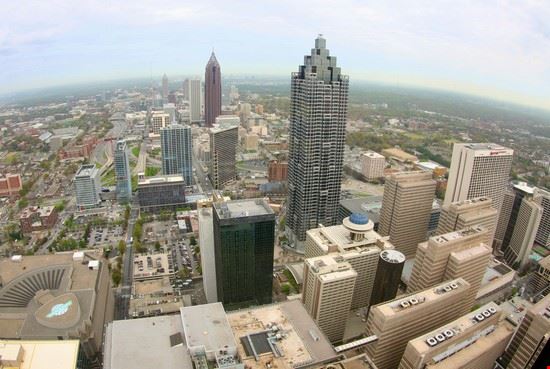 GuidePdfAppDownloadRow-GetPartialView = 0
Atlanta is the capital of Georgia in United States. With a population of over 480,000, Atlanta is a flourishing economy that boasts of a diverse populace mirrored in its wide neighbourhood. It is a commercial city with numerous attractions and landmarks.
Atlanta has a sub-tropical climate with hot, humid summers. The winters are moderate, and January is the coldest month. Atlanta receives adequate rainfall throughout the year with frequent ice storms. Spring and autumn are the best times to visit this city.
Atlanta has long been a commercial city and still boasts of an extremely strong industrial economy with the major centre of trade in the south. Today, it boasts of a prominent skyline with structures of the modern and post-modern era.

Overall Guide : Atlanta has lots to offer its visitors in terms of its parks, aquariums, historic landmarks and fun festivals. Georgia Aquarium has on display over hundred thousand aquatic creatures in tanks which hold eight million gallons of water. It has been... more a huge attraction for tourists since its inception in 2005. Piedmont Park is the largest park in Atlanta which receives over two million visitors annually. The park also hosts the Atlanta Dogwood Festival which is an arts and crafts festival held in spring when the dogwoods are in bloom. The Miami Circle offers some great décor and design options to its visitors while the Bennett Street boasts of various antique outlets and art exhibits. The Festival of Trees is a unique revelry which has on display some beautifully decorated trees of various kinds with the best part being the visitors bidding on a fully decorated tree.

Overall Guide : Visit the UNDERGROUND, bring an equalizer! It is a cultural shock. This must be seen. Buy just about anything you want from clothes to pharmaceuticals. Wait until you try the food vendors better than New York's slop anyday. Great shopping,... more bring cash for great deals. Park at Emory hospitol, valet paring all day only $8.00
Not to be missed THE UNDERGROUND , DULUTH MALL , CONYERS

Overall Guide : Hate that place. I really hate Atlanta. It's too hot. It's too humid. People are rude. Traffic is unbearable. Few good public spaces. Too much crime. Strip clubs rule the night scene. So happy I don't live there anymore!
Not to be missed Dekalb Farmers Market , Brickstore Pub , Cake and Ales restaurant

Overall Guide : i think Atlanta is a great place to be but sometimes i am scared on going on the cart that goes high up the stone mountain
Not to be missed stone mountain , visiting family members , Atlanta History Center

Overall Guide : Had a nice time in Georgia, Atlanta. Spent about 5 months. Enjoyed the places around. Thanks

Overall Guide : I lived in Atlanta for 16 years, its a great city, housing are affordable there, you can get a nice house far much less than any other place. It also have some nice lakes for going fishing, but I would... more rather be on the ocean, Love u Atlanta.
Not to be missed Opera , Hartsfield-Jackson Atlanta International Airport , Stone Mountain Park

Overall Guide : It is a very wonderful place and my uncle, grandma, aunty and two cousins live there.
Not to be missed A very pleasant shopping experiences , Opera , Chops

8
Dante's Down the Hatch