City Guide about Seattle with tips and reviews by travelers. 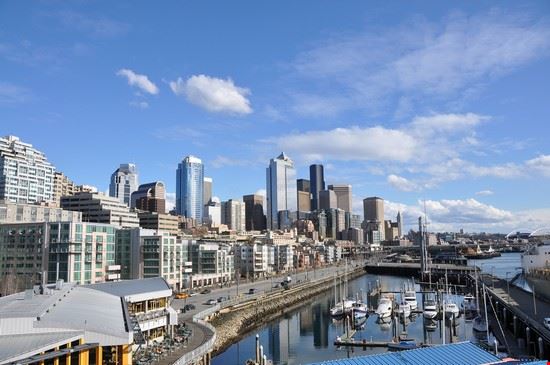 GuidePdfAppDownloadRow-GetPartialView = 0
Seattle is the largest city in the Pacific Northwest area of the United States. The city is also called the Emerald City for its abundant evergreen trees. With a population of over 579,000, Seattle has the highest percentage of graduates in the United States.
The city boasts of a Mediterranean climate. However, it is also typified as an oceanic climate owing to its cool summers. Summers range from warm to cool and are pleasant. Most of the precipitation is received as light drizzles with occasional downpours. Snow is a rare occurrence.
Seattle was founded in 1851 by Arthur A Denny. Initially known as Duwamps, it was finally named Seattle. It went through various boom and bust cycles but always rebuilt itself successfully. Five of the many Fortune 500 companies have their headquarters in Seattle.

Overall Guide : Seattle offers numerous cultural and recreational options to enthral its visitors. Space Needle is Seattle’s most famous landmark. A must-visit for tourists, it has been featured in many films. The areas around it host many cultural events like Folklife, Bumbershoot... more and more. The Klondike Gold Rush National Historic Park is a renowned indoor national park in Seattle, situated in the old Cadillac Hotel building. The Pike Place Market is another popular place filled with fishermen, arts and crafts, vegetables and fruit. It is a haven for shoppers, albeit it is slightly crowded. Seafair is a grand three-week summer festival which features torchlight parades, air shows, musical shows and carnivals. The Seattle International Film Festival and the Northwest Folklife are the best known cultural events taking place from July to August along with the other Seafair events.

Overall Guide : Lesquielles-Saint-Germain
Not to be missed Elysian Brewery

Overall Guide : What opinion? I just got here

Overall Guide : Seattle is beautiful when it's not raining, but it rains a lot. The traffic is some of the worst I've seen for a big city. And overall the people there are really snooty. Lived there for a while and glad... more I left. Been to a lot of places and countries and have seen worse, but for not being that large in terms of cities you would think the people there would be easier to get along with. I mean you expect this in Chicago.
IntroReviewListContainer-GetPartialView = 0,0156249
AdvValica-GetPartialView = 0
AdvValica-GetPartialView = 0