City Guide about Buenos Aires with tips and reviews by travelers. 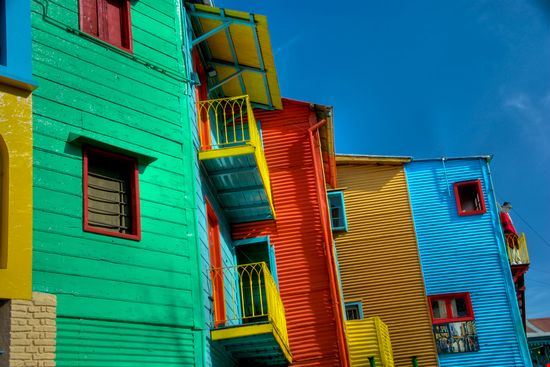 GuidePdfAppDownloadRow-GetPartialView = 0
The city of Buenos Aires is the capital of Argentina and also its largest port. It is located on the south-eastern coast of the country.
The city lies on the lush plains of the Rio de la Plata. The climate is generally mild and humid. Temperatures vary between 35°C in January to 10°C in July. Most of the rainfall occurs during the summer months.
Buenos Aires has a population of approximately 2,800,000 people. The inhabitants of the city are called Portenos, and they are mostly descendents of the Spanish and Italians. There is also a significant Mestizo, Arab and East Asian population.
Portenos have a unique cultural identity and their traditions are greatly influenced by their largely European origins.

Overall Guide : Buenos Aires receives thousands of tourists from all over the world every year. Most of the visitors come here to experience its unique culture and famed nightlife. The city has a number of theatres, art galleries, restaurants, discotheques, pubs, casinos... more and fine hotels. The Teatro Colon is a seven-storey theatre that hosts many cultural programmes such as operas and ballets. Guided tours are available that allow you to get a glimpse behind the scenes of this magnificent bastion of art. There are a number of museums where you can learn more about the history and culture of this fascinating city. Visitors should not miss tours to the Museo de Arte Latinoamericano de Buenos Aires, Museo del Cabildo and the Museo Evita. Buenos Aires has many majestic monuments that bear testimony to its glorious past. Some of the more spectacular buildings include the Basílica de Santo Domingo, the Cementerio de la Recoleta and the Casa Rosada.

Overall Guide : Excellent city to visit. Obviously there are areas, that at certain times, you should not visit (but you could say that of every city in the entire world), but overall I felt very safe. Public transport is very usable, and... more taxis are relatively cheap. Take in a Tango Show - well worth the cost. Some hotels are grossly overpriced, but lots of smaller, cheaper hotels which are very good indeed.
Not to be missed A Tango Show , San Telmo , Calle Florida

Overall Guide : Beautiful city, very easy to get around by public transport, which links with the "porteña" suburb. Mind your handbags and wallets on both buses and on the subway. People are lovely, they are all very helpful when you ask for... more directions or are trying to find a pub.

Overall Guide : Try and get some sort of guide, at recoletta cementry, it makes it so much more interesting. Start the walk to st telmo sunday market, on the plazo de mayo side of defense ave. Exchange rate commissions, vary dramatically to shop... more around
Not to be missed parilla , Recoleta Cemetery , San Telmo

Overall Guide : Beautiful city with friendly people who are always willing to help. Such a variety of things to do, the Arts are incredibly cheap, the opera only costs about US$10. There are really good museums. Generally the city's architecture is beautiful... more with a wide variety of styles. It is little wonder the residents are proud of the city and justifiably so!
Not to be missed Avineda Florida , Bernardino Rivadavia Natural Sciences Museum , the opera

Overall Guide : 3/4 days can be more than enough to get to know it thoroughly... if you're a fan of tango you can have it every day! Not too dangerous, but you should keep your head down at night and travel by... more taxi. Avoid the subway during rush hour.