City Guide about Brno with tips and reviews by travelers. 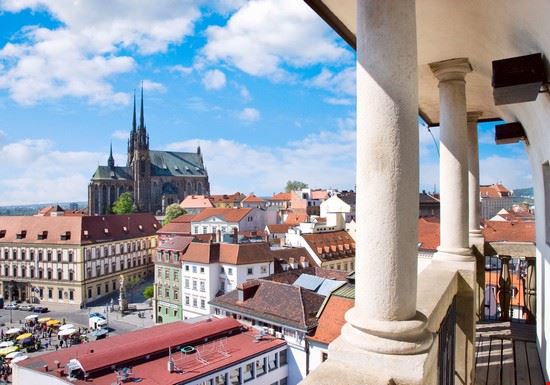 GuidePdfAppDownloadRow-GetPartialView = 0
The second largest town in the country and Moravia’s traditional capital, Brno was also the historic seat of the Premyslid dynasty. King Wenceslas I awarded Brno municipal status as early as 1243.
The city’s skyline is dominated by the Špilberk castle, where an early-Gothic palace with two chapels is still standing. Later on, the castle was converted into a baroque fortress, and in the 19th century, it became known as the infamous “Jail of Nations”.
The Petrov hill is topped by the Gothic cathedral of Sts. Peter and Paul. At the beginning of the 16th century, the Old Town City Hall portal was built, featuring a late Gothic peculiarity – a crooked pinnacle. Worth at least a brief mention are other historical buildings – the monastery and convent buildings of religious orders, the Parnas fountain in the Baroque-naturalist style, the bishop’s court, the Renaissance palace of the Lords of Lipá and Kunštát, church of St. Jakub (James), and the Hausperg Palace, nowadays the seat of the Goose on a String Theater.

Overall Guide : Brno is also a major center of modern architecture. The late-19th century Klein Palace was among the first structures built with modern technology (cast iron features, flushable toilets); the Mahen Theater was the first theater in the ... more country to use electricity throughout the building. Among other prominent buildings are Art Nouveau, early modernist and functionalist structures. German architect Mies van der Rohe’s 1929 villa Tugendhat is an outstanding example of functionalist architecture and a milestone in the development of modern architecture worldwide. Among other modernist landmarks is the Brno Exhibition Center, whose set of buildings (built over the period of forty years, from 1930s to 1960s) makes up a harmonious whole; over 50 fairs and exhibitions take place here annually. Brno also offers destinations outside the city center – the city ZOO, botanical garden, arboretum, and extensive orchards. Motor sports enthusiasts flock to the Automotodrom Brno with the new Masaryk Circuit – a venue of the World Moto Grand Prix. Brno is the seat of the South Moravian Regional Administration (hejtmanstvi Jihomoravského kraje.)