City Guide about Lecce with tips and reviews by travelers. 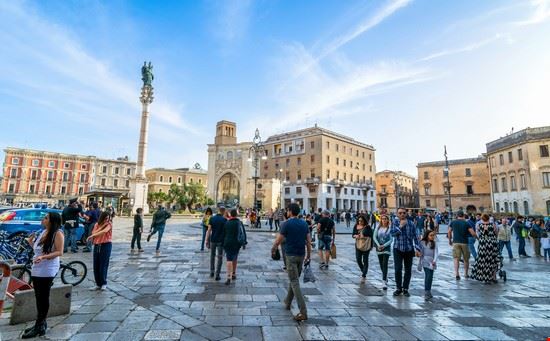 GuidePdfAppDownloadRow-GetPartialView = 0
Lecce is a city in the region of Apulia, Italy and also the capital of the province of Lecce. Also known as ‘La Firenze del Sud’, meaning ‘Florence of the South’, it has a population of around 95,000 inhabitants. The city is famous for its beaches as well as the famed Baroque monuments.
The climate of the city is of the Mediterranean variety with mild winters and hot summers. It is mostly dry and sunny in the city barring the months of November and April which get irregular rainfall. The weather enables the growth of tourism to a great extent.
Initially, a Greek city, and then, a Roman town, Lecce developed to become one of the most important cities of Italy. Today, the city is an important agricultural and industrial centre with oil, ceramics and wine being the main industries.

Overall Guide : The city is full of monuments and has a cultural heritage. The place is best suited for the people who just want to relax and visit old heritage monuments and churches in the city. Being a very traditional place there... more are beautiful church, museums and Heritage places. To start your tour with you should first go to Basilica di Santa Croce. The church is sculpted beautifully and looks like a craving of gold. At night the church is a real place to watch. The other place to visit is the Duomo di Lecce. The place is filled with old monuments, shops. As the day goes the area looks more beautiful in the evening.
Not to be missed Santa Croce Basilica , Celestini Palace , Church of Santa Irene