City Guide about Petra with tips and reviews by travelers. 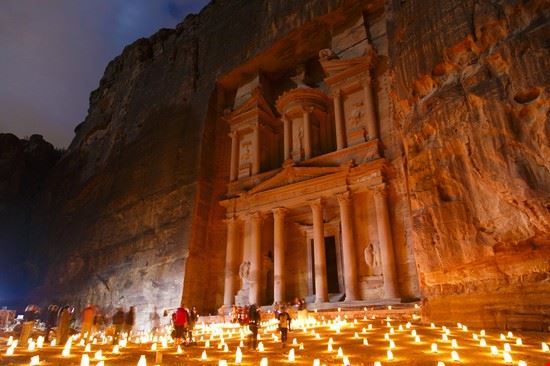 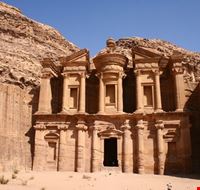 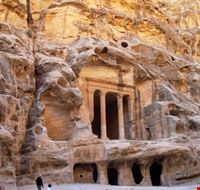 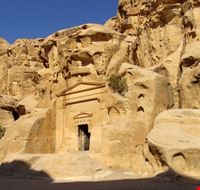 GuidePdfAppDownloadRow-GetPartialView = 0,0156257
Petra is a prehistoric city in Jordan, which lies in the famous Wadi Araba Valley. Petra implies ‘rock’ in Greek and holds no record of an official population as there only some natives who permanently reside here. Petra is also a World Heritage Site and receives thousands of visitors every year.
The city has a moderate climate with summers ranging from mild to hot; winters, cold and rainy. The climate is mainly dry almost all year round. Evenings in summer are pleasant with cool breezes. Most of the rainfall received is in short showers. Spring and fall are pleasant times to visit.
The history of Petra dates back to the sixth century; it was initially known as Rekem. Petra was under the brief rule of the Romans during which it progressed considerably. Today, it is a renowned tourist destination and a World Heritage Site.

Overall Guide : Siq is the sandstone valley, also an entrance to Petra. The rock walls bear beautiful sandstone carvings and patterns built during the Roman Empire. Al-Khazneh, or the Treasury, is a grand structure which is rumoured to contain many hidden treasures... more of the pharaoh. Adjacent to the treasury is the Street of Facades which is lined with the facades of numerous tombs. The Roman Theatre, a 6000-seat theatre, is still utilized for local performances. It is located at the edge of the Street of Facades. The largest monument in Petra is the Monastery, which has its roots in the first century. A small, but significant, place, the monastery has 800 steps. The High Place of Sacrifice is a popular spot in the city. The view from the top is scenic with many beautiful shrines. Visitors can take a trek of the place which will introduce them to some interesting carvings and tombs.

Overall Guide : The trip where I got myself pushed to its limits and beyond, motivated by my bro Zikry Kholill. This what happens when two co founders decide to go for a short fun adventure, Yes! we've been there several times before... more but, it's obviously we just can't have enough of this magical place. Coolest part where we met a lot of nice people, well... mainly they were encouraging me to climb up the 1000 stairs to the monastery :P and of course we took the chance to talk to some people about Incitement world wide and what we Incitement Jordan are doing here ;) So whenever you get the chance to visit Jordan I highly recommend you guys to visit the wonderful Petra.
Not to be missed El-Deir , The Siq , The Treasury

Overall Guide : Petra is one of the great marvels in the world that I have ever seen. You just want to set for hours and look how it was craved in rose colored stones in the middle of breathtaking desert. The jordanian people are... more so kind and helpful. They are also easy to communicate with. They at least know English. In the other hand, Jordan, where Petra is, has many other places, castles, the dead see and everything you can imagine. It was a fun enriching trip.

Overall Guide : It's impressive and very spiritual. For finding yourself and life. It's romantic for couples, educational for children. You should go in the spring. The city isn't expensive, but it's not cheap. In recent years it has become a popular destination... more for tourists from all over the world. You should go at least once in your life.

Overall Guide : Visit all the archaeological sites, even the most remote and hard-to-reach one ... it's worth it! A fun fact, you'll find the tomb of Sesto Fiorentino in Petra, he was a Roman consul. The tomb has nothing to do with... more the place near Florence, which is called Sesto Fiorentino.

Overall Guide : Petra is a nice place to visit. It may not look nice or if it is long walk, tyring or boring, but if you get to know how and why it is made, you would really like it and its... more story. I think Petra would be a better place if it was more popular and if it has more tourists . Petra has horses, camels and donkeys you could ride at. Have fun visiting and good luck!
Not to be missed El-Deir , The Treasury , City and Desert tour

Overall Guide : The sunken path between the multicoloured rocks prepares you emotionally for the vision of the archaeological site, which radiates fascination the very first time you see it, despite the hype by the media and travel agencies.

3
Jezra Travel - Tailor made tours for every budget
12 Votes