City Guide about Benidorm with tips and reviews by travelers. 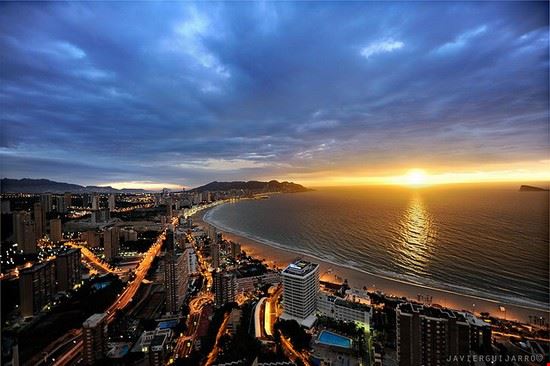 GuidePdfAppDownloadRow-GetPartialView = 0
Benidorm, a coastal town in the province of Alicante, is located in Spain. Situated along the Mediterranean Sea, Benidorm is a major tourist destination bringing in more than four million visitors a year. The city has a population of around 67,000 inhabitants.
It has a special micro climate created by the presence of hills that surround the city. Winters are characterised by mild temperatures, and the city enjoys a great amount of sunshine throughout the year.
Officially established in the year 1325, the city was awarded to Spain by the Lord of the Baronia de Polop. The fourteenth and fifteenth centuries witnessed a great deal of pirate attacks on the island.
A former fishing and agricultural village, Benidorm is one of the main tourist centres in Europe today. Tourism and construction are the main sources of economy.

Overall Guide : Benidorm, with its world-class resorts, virgin beaches and scenic beauty is a haven for its visitors. The city is home to a number of theme parks that guarantee unlimited fun and are widely popular among children. Some of the most popular... more theme parks include Mundomar Park, Aqualandia Water Park, Terra Mitica and Terra Natura. The city’s two top beaches are the Playa de Levante, popularly known as the ‘Sunrise Beach’, and the Playa de Poniente, also called the ‘Sunset Beach’. While vacationing in Benidorm, be sure to visit Peacock Island for a spectacular view of the Benidorm skyline. The other popular locations include the Old Lead Soldiers Museum, Mal Pas beach and La Cala beach. Carnival is the most popular festival celebrated throughout the city with processions, fireworks, dance and music. Benidorm also houses plenty of pubs and nightclubs; the Benidorm Palace showcases some of the best shows in Europe.

Overall Guide : Benidorm has everything for every one of any age, it is not comparable with anywhere else. Where else can you sit in the sun, have a coffee cake and a short for two euro, have a three course meal with... more drink for five. Its clean, generally safe and full of life. Only drawback as I see is it may be a little too hot in the summer. If you don't enjoy Benidorm you are most likely dead!!
Not to be missed Levi's (show boat) , The Plaza , The Palace

Overall Guide : Everything I want is here, entertainment, beaches, some very good hotels and apartments. An ideal place for all ages and the locals are usually extremely friendly and helpful.
Not to be missed the beaches

Overall Guide : Benidorm has something to suit every pocket and the entertainment is second to none.
Not to be missed mirador , Benidorm Palace , Levante Beach

Overall Guide : The old town is lovely and out of season no evidence of the louts you hear so much about. The shops are really good and quite reasonable. good for the elderly and the young, something for everyone

Overall Guide : Good Value for money, beautiful beaches, great food, good entertainment, something for everyone.
Not to be missed Tapas Alley , Old Town