City Guide about Pamplona with tips and reviews by travelers. 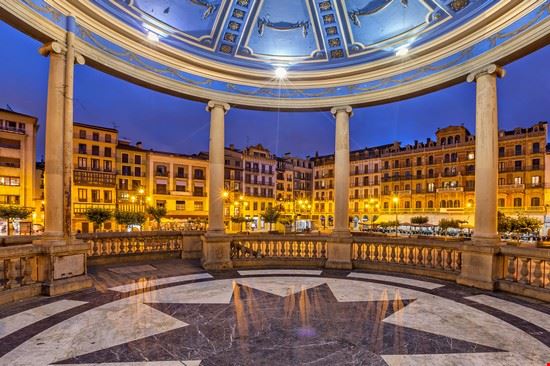 GuidePdfAppDownloadRow-GetPartialView = 0
The city of Pamplona in Spain stands as the capital of the Navarre province. The location of Pamplona is highly strategic and considered as crucial from the military point of view. It is placed in a valley that connects the northern mountains and the Ebro valley. The centre of this valley is formed by Navarre.
These specific geographical locations make the climate here a bit diverse. The climate is oceanic as it has the effects of the Continental Mediterranean.
This location plays an important role from the economic point of view, as it is in the centre and can pay heed to all the surrounding cities. This has helped in setting up several links which are cultural, social as well as commercial. This area covers a land of 23.55 sq. km.
This city is based on the right banks of the Arga River. The population crosses a bit over 195,769 which are large as compared to the area. This city is very posh and people live a luxurious life. This city is declared as one of the cities with the highest standards of living.

Overall Guide : Pamplona is a rich and a developed city with no sign of compromises. This city is very famous for its annual festival known as the ‘San Fermin’ which is held in the month of July. Crowds come up in large... more numbers and anticipate this festival. The main attraction of this festival is a race in which bulls are raced amongst each other. There is another heritage centre called as ‘The Star Fort’ which was built around 500 years ago. The walls of this fort are still existent today and are worth seeing. There are a number of museums in the city as well. Two major museums here are ‘The Museo de Navarra’ and the ‘Museo Diocesano’, both of which are related to archaeology and religious findings. Pamplona is also the key venue for the hosting of ‘Punto de Vista’ festival, which hosts international documentaries. Also there are some notable churches which are a great mixture of architecture and culture.
IntroReviewListContainer-GetPartialView = 0,015624
AdvValica-GetPartialView = 0
AdvValica-GetPartialView = 0