City Guide about Abu Dhabi with tips and reviews by travelers. 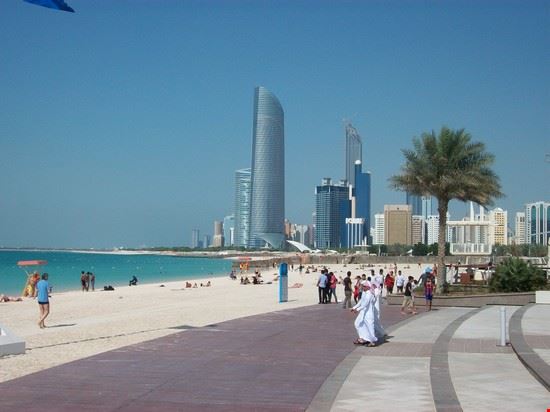 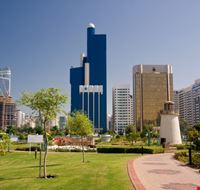 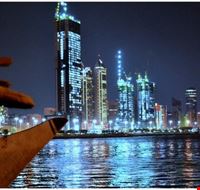 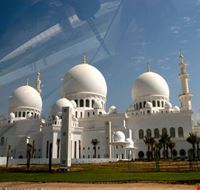 GuidePdfAppDownloadRow-GetPartialView = 0,0156267
Abu Dhabi is the capital of the United Arab Emirates and is the 2nd most populous city after Dubai.
As of 2008, approximately 1,000,000 people reside in Abu Dhabi amongst which almost 80% are expatriates.
It is situated on a T-shaped island extending into the Persian Gulf from the central western coast.
Its weather is hot and humid from April to September and cooler from November to March. Occasional sandstorms occur in the region which reduces visibility.
In terms of the Gross Domestic Product, Abu Dhabi is the wealthiest emirate in the UAE. It’s very well-known as one of the world’s largest producers of oil which is a major source of economy for the city.
From some years however, the government has attempted to diversify the system by investing in the financial services and tourism industry.

Overall Guide : Since the climate is hot during June - September, residents or visitors are advised to take 3 litres of water every day. This is the safest city I had ever seen, even at midnight one can go for walk or... more take money from ATM. Since multi culture is centred here, Arabs here are so nice and hospitality to welcome others. The rich Arabic Culture makes one feel at home. I had been living here for the last 20 years and I love this place and rulers. The infra-structure is very effective and update. One can have liquor permit if wants to have alcohol. But driving with alcohol drinking is not allowed. There are many bars with proper licence are running their business here. WE get different types of food here, Indian, Inter-continental, Asian, European and of course authentic Arabic food. Non-UAE citizens are not allowed to wear the dress which belongs to UAE citizens only. The police here are nice and very straight forwarded. No bribes and the way they act in swift makes one surprise of their efficiency. I am only disgusted with people who come into this country for earning and do not adhere modest dress, even though the authorities do not mind it, I feel it is our responsibility to respect their culture and being one with them.

Overall Guide : Abu Dhabi has around 20 small to medium sized parks and gardens, chief among them are Al Mushrif, Al Khalidiya and Capital Garden. Sheikh Khalifa Park is a major landmark of the city. It offers a harmonious blend of Islamic... more and Arabic architecture. Visitors can enjoy various water-bodies like fountains, lakes and canals spread throughout the park. Al Ain Zoo, which is located around 400 hectares of land, has some exotic animal species on display. Arabian Oryx and Gazelles can be seen in large numbers besides Giant tortoises can be viewed here too. Hili Fun City is a modern suburb containing a theme park. It has wild rides, restaurants and shops. An ice rink is also adjacent to the city. Marina Mall and Abu Dhabi Mall are two of Abu Dhabi’s biggest shopping malls attracting visitors throughout the world. Traditional Souks or markets offer opportunity for antique shopping. For outdoor activities, the vast sand dunes surrounding the city offer off-road driving.

Overall Guide : THE HELPFUL PEOPLE OF ABU DHABI On Friday night of last week I managed to lose my mobile phone, after a day of worry a friend introduced me to a gentleman called Khalid Alomaira unknown to me he was from... more the CID. Khalid was very understanding and amazingly helpful, after asking me a few questions he made a brief phone call. Khalid then told me my phone would be returned within 15 minutes.15 minutes later as promised my phone and I were reunited.Foreign nationals both visitors and ex pats are treated with the greatest respect and helpfullness in Abu Dhabi

Overall Guide : Things are getting expensive, housing n other stuff...like if you stay some place cheap you cannot get your family visa. And its hard to find other cheap places. With this new rule we have to provide electric bill if we... more need family visa traffic fines are increasing with out informing. Tts like temporary cameras are all over and if little speed is high its shot....we should have a lil flexibility. It's good and safe to stay here in Abu Dhabi but somethings are getting expensive which makes it hard... hope you all understand what we need. Thanks for asking. jonaid
Not to be missed Corniche Road

Overall Guide : It is one of the most beautiful cities where I lived everything orderly and safety and security available and the treatment of Emirates nationals are all good and affection. High temperature in the grade separation of up to 45 degrees... more Celsius during the months of June, July, August and September The rest of the months, lovely atmosphere and moderate temperatures Beautiful shopping malls and available all brands Quiet and safe beaches and a dedicated places for families. I would advise everyone to visit our beautiful city of Abu Dhabi
Not to be missed Abu Dhabi Shopping Festival , Cultural Foundation

Overall Guide : The first impression is that of tranquility. Vibrant but low in din & bustle, very modern but not heartless, approachable but not granted. Mosques all around Abu Dhabi poses as the sentinel as well as attestation to Islamic heritage. What... more would strike sublimely beautiful is the blend of all nationalities, cultures, languages even dresses. Architectural beautification have started catching the eyes of appreciation. Renovated cornice around water front is a continuous source of beauty as well as peaceful walk for pedestrians. Malls are of international standard. Some surpass the grandeur of any international landmark. With a minimum fund of 100 Dh one could enjoy 1st class shopping experience.
Not to be missed Corniche Road

Overall Guide : Greta place to stay and lead a perfect family life. Extremely metropolitian city with people from over 200 countries. Speaking from an Indian perspective - you have lot of Indians around you - you also have a lot of Indian... more restaurants (even for vegetarians and Jains). If you plan to shift here - having a salary of about 7K-10K per person (1 earning + 1 dependable) should help you lead a good life.
Not to be missed Corniche Road , Best Beaches

Overall Guide : Abu Dhabi is a very safe place. Modern infrastructure. You have a variety of choices for accommodation that suits all budgets. Business environment is healthy, you can make good money with honesty and hard work. Shopping leisure is not yet... more at optimum but Otis gradually improving. A good place for a family. Plenty of sports activities including sailing to natural islands, formula 1, golf tournaments, horse racing, camel racing, and many others..
Not to be missed Yas Waterworld , Ferrari World

Overall Guide : It's kind of a beautiful city. Concerning security and other problems is better than other areas. This will be my first visit to Abu Dhabi so after visiting it will be much more helpfull to give you the accurate information... more of this city. It's comparatively hot but i still have to taste the cuisine and meet thenationals and their attitudes.

Overall Guide : A detailed Map is not available in all bus stop, only list so for people that are not really familiar with the City are force to ride the taxis instead. A detailed map should be better provided the one posted... more in the Bus terminal, also the Comfort rooms in the Bus station and Taxi stand are disgusting most especially the taxi stand.
Not to be missed Yas Island
IntroReviewListContainer-GetPartialView = 0,0312512